Roseanne Has A Point 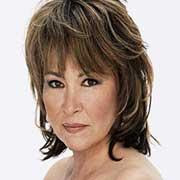 While interviewing Jasmyne Cannick as a guest host for a radio show on KCAA-AM in San Bernardino, CA last week, Roseanne Barr made the following comments about gay peeps.

Never once in my 54 years have I ever once heard a gay or lesbian person who’s politically active say one thing about anything that was not about them. They don’t care about minimum wage, they don’t care about any other group other than their own self because you know, some people say being gay and lesbian is a totally narcissistic thing and sometimes I wonder.

I’ve never heard any of them say anything except for “accept me ‘cause I’m gay.”
It’s just, it’s screwed. It’s no different than the evangelicals, it’s the same mindset. They want you to accept Jesus and you guys want us to all believe it’s ok to be gay. And a lot of us, a lot of them, I do, I don’t give a damn who anybody has sex with, as long as they’re not underage and an animal. I don’t give a damn, it’s none of my damn business. I’m just sick of all the divisiveness, it’s not getting any of us anywhere.

The Victory Fund swiftly released a statement condemning remarks and quickly trotted out openly gay Alabama state legislator Patricia Todd and her work to establish a state minimum wage as a example of a gay person who does care about the issues she raised. Here in Kentucky Louisville's Fairness Campaign has consistently lent its voice to a wide range of causes beyond its primary focus on GLBT civil rights issues.

But Roseanne does have a point. There are too many gays who selfishly don't care about any issue other than their own civil rights. Unfortunately there are many African-Americans and others nodding their heads in agreement with her. The transgender community has experienced that attitude all too often since Stonewall and over the last 13 years.

We have a running battle going on with elements of HRC and some gay activists over transgender rights issues. We've been dismissively told by some of them 'it's not our turn' or 'wait until we get OUR rights and we'll come back for you' as they cut transgender peeps out of 'their' hate crimes and employment bills over the last decade at various levels of government. Some have even loudly complained we shouldn't even be part of 'their' movement while getting indignant over African-Americans flipping the script on them. Their panties get all in a bunch when African-Americans say that the GLBT rights movement is not the same as the 60's Civil Rights Movement and they need to stop hijacking 'our' movement. 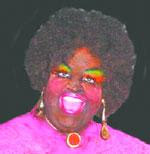 African-American GLBT/SGL peeps have long had drama with the selfish white gays over racism in the community and their double standards about it. Gay peeps justifiably fumed, ranted and raved over Tim Hardaway's and Isaiah Washington's comments. They generated reams of press releases condemning them while the selfish ones flocked to watch a white gay man named Chuck Knipp do a demeaning minstrel show that African-American peeps have been loudly protesting since 2002. They then have the temerity to tell us to 'get over it'. When we call them on their double standard they spew racist invectives at SQL's African-American critics to defend the gay man doing the minstrel show.

Ain't that a switch.

Black gays, y'all ain't off the hook on this, either. There are many of you who only care about where's the next fabulous party, pageant or ball than being engaged and involved in the community. Before y'all start tripping I know that there are many African-American GLBT peeps who ARE active in various organizations and doing wonderful work to uplift the race. Unfortunately the perception out there is that we're not and don't care.

Roseanne apologized for the statement, but it's that perception and the actions of some gay peeps that led her to make it in the first place.
Posted by Monica Roberts at 11:43 AM

Can't we all just get along?

Seriously though, it's true. I'm new to all of this, but I'm seeing how selfish agendas lead to a new letter for each underrepresented demographic (B, T, L, etc), instead of one solid "Q" movement. (as if tacking on a letter makes them a supporter)

It's similar to why/how people of color start their own separate Pride movements and the mainstream org's only see it as divisive.

They can but only if people are willing to listen to each others grievances and work them out.