TRELAWNY, JAMAICA - A cross-dreser was set upon and severely beaten by a mob in Falmouth's Water Square yesterday morning.

Police who were called to the scene had to fire warning shots to disperse the stone-throwing, stick-wielding mob, which succeeded in tearing off the man's black-and-white form-fitting blouse and jet black wig.

According to eyewitnesses, the man was spotted at approximately 8:30 am in the town centre apparently waiting for transportation. He was wearing heavy make-up, high-heeled shoes, a long pair of shiny earrings, a black leather jacket over a snug black-and-white blouse, a tight-fitting pair of jeans, a black wig, a pair of sunglasses and a handbag slung over his broad shoulders.

It was not clear yesterday how the alarm was first raised. However, the Observer was told that the assault began as soon as someone in the busy square shouted that the person was actually a man wearing female attire.

The news of the man's presence in the community spread rapidly and in a matter of minutes scores of angry residents converged on the scene and began to rain blows all over the cross-dresser's body with sticks, stones and whatever weapon they could find. "Where is the police station at?" the frightened man screamed. 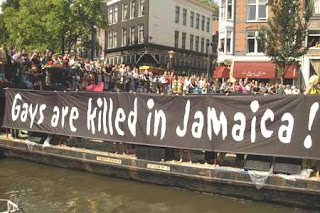 During the melee, the wig the man was wearing fell off and wads of newspaper stuffed in a brasserie to lift the man's chest dislodged, while a cosmetic kit containing lipsticks of varying colours was thrown from a bag he was carrying, much to the amusement of the large crowd who stood watching.

"B***y boy fe dead," persons among the mob shouted. The sentiments were echoed by the rest of the riled-up crowd.

"Falmouth no pet no b***y boy. We no want none a them bout here," one woman yelled.

After the mob dispersed, the victim was whisked off in a police service vehicle, much to the disapproval of the crowd who rushed upon the vehicle demanding the man's release. "If you ever did see him. Him dress hotter than you and me," one young girl was overheard telling her friend.

"Nu worry man, we gi him a proper [beating]," one man said proudly.

The man was admitted to a hospital. However, a police spokesman said last night that a group of people, who wanted to beat the man on his release, were waiting outside the hospital, which, he said, could delay his release from the health facility.

Yesterday's beating was the second such in a month in western Jamaica.
In the previous incident, several men alleged to be homosexuals were chased, beaten and stabbed, resulting in one of them being hospitalised, during the Supreme Ventures carnival on Gloucester Avenue, Montego Bay. The men were said to have gone onto the stage and gyrated on each other, angering the patrons.

Sadly, this is not an isolated incident in Jamaica these days.

When is someone in the Jamaican government gonna step up to the plate and state the obvious? It's not okay to beat down or kill your fellow citizens simply because you ASSUME they are gay, don't like who they sleep with if they are, or look better in a dress and heels than you do. It's also bull feces to hide behind religion to justify your naked bigotry. 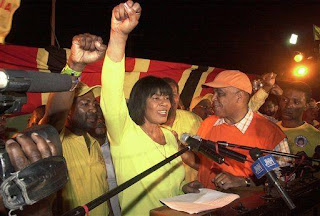 Until Prime Minister Portia Simpson or someone in the Jamaican government makes that simple declaration, I propose that GLBT people worldwide initiate an immediate economic boycott of Jamaica.

Maybe hitting them in the wallet will get them to stop the madness.

The sad part is that Jamaica is one of my top ten places in the world that I would love to visit. But since they're beating and killing GLBT people on the streets and probably aren't taking the time to ascertain whether they're tourists or locals, I'm not going to the most homophobic place on Earth.

As of today I refuse to spend any more of my hard earned dollars on potential Jamaican vacations, Jamaican products, Red Stripe or Jamaican rums until they come to their senses. If I'm on a cruise and the ship stops in a Jamaican port I'm not going ashore to support the local economy.

If Jamaicans will not make room for my GLBT brothers and sisters to live peacably in their homeland and continue to viciously attack them and kill them, then why should my dollars support their naked bigotry and hatred?

Thank you Bishop Noel Jones. You and your cohorts in the Jamaican Anglican church have the blood of the Jamaican GLBT community on your hands for not only fostering the climate of hatred, but lobbying the Jamaican parliament to keep the anti-gay laws in place that are one of the root causes of the violence.
Posted by Monica Roberts at 8:57 AM

Hey Monica: First, instead of boycotting Jamaica, as seems to be most Black folks' response to this, the White church folks at MCC are instead going INTO Jamaica, building relationships and helping: http://livelovelearn247.blogspot.com/2007/05/i-received-following-email-from-rev.html. Second, I don't think Noel Jones is Anglican. The Jamaican-American is a major Pentecostal preacher in the United States: http://www.jamaica-gleaner.com/gleaner/20041120/mind/mind1.html. Also, Anglican Suffragan Bishop of Montego Bay wrote a powerful column in the Jamaica Observer calling on the church to take leadership on homosexuality and anti-gay violence. "There is no biblical support for Christians dealing with any sin by recourse to attacking, stoning, or murdering the sinner," he wrote, lamenting that the Church is "not prepared to take a lead in formulating a posture of care and pastoral response to homosexuals" and warning that "we must not confuse people and send mixed messages which lead them to commit acts of violence with the assumption that it is an expression of loyalty to Jesus": http://www.jamaica-gleaner.com/gleaner/20041120/mind/mind1.html

I seem to recall an economic boycott was the major tool that got South Africa freed from apartheid's odious grip.

It's good to see not all Anglicans or Jamaicans are taking their lead from Peter Akinola, Buju Banton, fundie rastas or the Low Impact Misleadership Coalition of black meagchurch 'ministers'.

I stand with you Ms. Roberts. A friend (author Cheril N. Clarke) sent me a bulletin about the incident of the mob attack on a transvestite in Jamaica.

We cross-posted it on our blog: http://savvyplannersblog.blogspot.com/2007/05/gays-must-leave-today-gay-eradication.html#links

Not only should gays boycott Jamaica, but friends and family of gays as well.

HannahPet said...
This comment has been removed by the author.
3:23 PM

I'm so with you! This summer I was suppost to go to Jamaica on a Cruise, and I told my mother hat if we do go that I am NOT going on shore. I can't suppost a place that hates people for how God has created them.

Anonymous said...
This comment has been removed by the author.
9:13 PM

While i do not support the beating or stoning of anyone including gays, God did not make anyone gay. That was their choice..DO NOT BLAME GOD. MY opinion who don't want to come here dont..keep your nastyness and money we are a blessed country and will even be more so when the nastyness is not here.....TEK WEY UNO SELF

The only nastiness going on in Jamiaca is coming from people that think it's okay to kill their fellow citizen because they don't like who they sleep with.

The Bible I read does have a commandment in it that says 'Thou shalt not kill'.

It also has a verse that says, judge not, lest ye be not judged.

Far from being blessed for hating on gay people, you will reap what you are sowing soon enough.

As Dr. King stated, 'the arc of the moral universe is long, but it bends toward justice'.

And trust me, justice will be served.

The delicious part about it is that it does happen, you probably won't get the results you smug gay haters were told would happen by those Southern Baptist missionaries and your local Anglican church.

I would really appreciate being removed from this forum. I can assure you that, although I am heterosexual and believe it is wrong to be gay and even far worse to embrace the 'transgender' concept, I have left no such comment on your blog and do not wish taking credit for it.

Thanks and best regards,
Shellie Ann

i am part of a coalition launching a jamaica boycott this weekend in SF.

we are asking gay bars to pull myers rum and red stripe beer from the shelves.

if you have the time to chat about the boycott, i'd love to speak with you.

and my addy is mpetrelis@aol.com.

please be in touch.