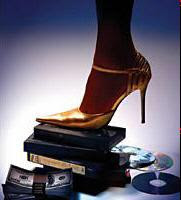 One of the things that I was amused and pissed to hear during the whole Don Imus flap was the pathetic attempts of conservatives to shift the blame to the African-American community.

The African-American community has been decrying negativity in hip-hop for over a decade. Y'all haven't been paying attention.

In 1993 C. Delores Tucker was calling hip-hop "pornographic filth" and saying it was demeaning and offensive to Black women. She was slammed in 1994 when she objected to nominating Tupac Shakur for an NAACP Image Award.

In 2004 students at Spelman College mobilized and got a Nelly campus appearance cancelled in the wake of his misogynistic Tip Drill video that incensed women at the most famous African-American women's college in the nation. That resulted in Essence Magazine starting their ongoing Take Back The Music Campaign.

Since Oprah is focusing her considerable media platform on this issue we now have White America's undivided attention. Over the next two days Oprah's show will be devoted to broadcasting a town hall meeting entitled After Imus: Now What?

Today's show had some interesting commentary from voices ranging from Maya Angelou and Stanley Crouch to India.Arie and the Rev. Al Sharpton. It was also gratifying to see the Spelman women finally get recognized for what they've been trying to say for several years. Tomorrow's show will have the response from the hip-hop community courtesy of hip-hop mogul Russell Simmons and rapper Common.

Yes, we have major work to do in our community and thank God this conversation has finally been jumped off. I hope that it results in some substinative sustained action over time. We also need to point out as Asha Bandele did today that the b-word and n-word didn't originate in our communities or with gangsta rappers. African-Americans have had those words hurled at us and suffered assaults on our images since 1619.

We can finger point at each other all day long, the bottom line is that the denigration of our women needs to stop. As C. Delores Tucker once said, "You can't listen to all that language and filth without it affecting you."

Too bad not many peeps were paying attention to Ms. Tucker in 1993. Better late than never.
Posted by Monica Roberts at 8:40 PM