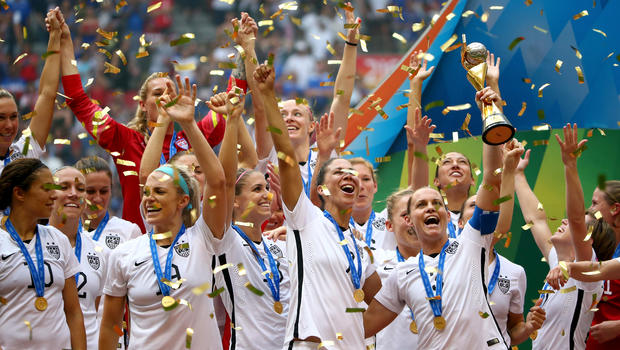 Looks like Dolt 45 has a decision to make after the USA women handled their soccer business and completed their run to back to back titles for the first time in program history by defeating the Netherlands 2-0.

This was Team USA's fourth FIFA world championship, and they left no doubts about the fact they are the world's best team despite a stiff challenge from the Netherlands, the reigning European champions who were playing in their first FIFA women's World Cup final.

The Netherlands was riding the hot goalkeeping of eventual Golden Glove winner Sari van Veenendaal, who kept the USA scoreless until  Alex Morgan drew a penalty in the 61 minute that led to Megan Rapinoe's sixth goal of the tournament.   That snapped van Veennedaal's scoreless streak at 314 minutes, and seven minutes later Rose Lavelle sent a scorching shot from 18 yards out past van Veenendaal to make it 2-0 and start the party in Lyon for te American fans there and back in the USA.

The Netherlands along with England and Sweden did walk away from this tournament knowing that they have qualified for the 2020 Olympics..    Sweden also won the Third Place game 2-1 against England.

But all hail the queens of the FIFA soccer pitch.    Will they threepeat in 2023?   We'll have to wait to find out the answer to this question.
Posted by Monica Roberts at 12:00 AM