The 'How I Feel About Trump' FB Post Debunked 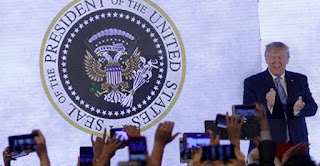 The suburban white peeps who voted for Trump are now thrying to look for ways to justify voting for him again in 2020 and not look racist while doing so,

That ship sailed a long time ago Chad and Becky. 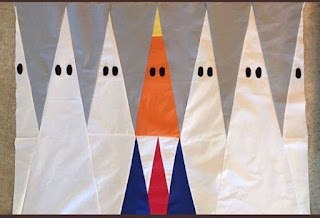 This is why the Democrats need to laser focused from now until next November 3 on getting our base to the polls and increasing turnout amongst them instead of chasing the mythical suburban white swing voter that always keeps kicking them to the curb and voting GOP.

I ran across this problematic racist 'How I Feel About Trump' post on a former co-workers page.  She revealed she was one of the 53% of white women who voted for the Grand Wizard In Chief.

After I called out Trump, she tried to claim 'he's not racist' .  Y'all know I called that crap out with the quickness, then blocked her.

This is the mentality of white suburban Trump voters and why it may be a fool's errand for Democrats to try to flip them in 2020 when they are cosigning crap like this in order to justify their 2016 vote and try to rationalize casting another vanilla scented privileged vote for him again.

I'm going to take this original Facebook post and debunk it in sections:  My rebuttal comments will be in bold print.

HOW I FEEL ABOUT TRUMP

MR:   Nice try at the dog whistle racism all over this first paragraph.  Trying to cover up the slur word for Black peeps with 'raccoon'


Here's why we want Trump: Yes, he's a bit of a jerk; Yes, he's an egomaniac; but we don't care!.. The country is a mess because politicians suck, the Republicans and Democrats can be two-faced and gutless, and illegals are everywhere.. We want it all fixed!..

MR  Correction: The country is a mess because Republican politicians like Mitch McConnell are more concerned with pushing a right wing agenda than doing the people business
FYI, No human being is 'illegal'.  I want the immigration system fixed, too.  but throwing asylum seekers in Trump concentration camps and their kids in Trump baby jails isn't the way to go about ti.

MR I and the 65 million people who voted for Clinton do care that he's all of the above including a racist, women's crotch grabbing azzhole with zero clue about how to run a business, much less the USA. .

This country became weak and bankrupt, our enemies were making fun of us, we are being invaded by illegals, we are becoming a nation of victims where every Tom, Ricardo, and Hasid is a special group with special rights to a point where we don't even recognize the country we were born and raised in; "AND WE JUST WANT IT FIXED”.. And Trump is the only guy who seems to understand what the people want..

MR  Our enemies are making fun of us on the world stage BECASE Trump is occupying the WH.  And there's that dog whistle racism again in the false claim that our country is being 'invaded by illegals'.

Demanding equal rights coverage promised to every American by the Constitution is not 'special rights'.   The diversity of America's population is our strength, don't something to be denigrated or feared.

And Trump has no clue what the people want.

We're sick of politicians, sick of the Democratic Party, sick of the Republican Party, and sick of illegals!.. We just want this thing fixed..

MR  The rest of reality based America is sick of racist MAGA azzholes who think that immigration is a detriment to this country.   And exactly what IS the thing you want fixed?

MR You also voted for a man who is racist jerk

We all know that he has been very successful, he’s a good negotiator, he has built a lot of things, and he's also NOT a politician, NOT a cowardly politician.!..

MR:  If it weren't for Daddy Fred's money, he'd be swilling beers with the rest of you MAGAts.  As for a successful negotiator, Trump has proven to be anything but that.
And yes, he is a cowardly politician.  A thin skinned coward that can't handle criticism or the truth being told to him that he ain't all that, especially by Black women.

And he says he'll fix it.. And we believe him because he is too much of an egotist to be proven wrong, or looked at and called a liar.. Also, we don't care if the guy has bad hair.. We just want those raccoons gone, out of our house, NOW!!!

MR  Sad that you believe the FOX Noise hype about him being a 'great POTUS".   Yeah, right.  He's the worst ever in addition to being a baldfaced liar
And once again, who are these raccoon you're babbling about that you want out of 'your house'?  Black people?  Latinx folks?  Muslims?  Asians?  TBLGQ people?

And if our house is a thinly disguised metaphor for America, this house belonged to native Americans long before you Europeans came here

You are welcome to copy/paste/share this.. Thousands of people who haven't voted in 25 years seem to be getting involved.. And the more people get this message, the more that will understand why Trump was elected..The raccoons have got to go!!!


MR Thar racist piece of orange excrement occupying the White House has to go for the sake of our country and the planet.