The Fight To Keep HERO-September 28

The latest attempt to put a fresh coat of lipstick on the same discredited anti-trans lie the anti-HERO peeps have been telling came in a recorded commercial coming from former Houston Astro lance Berkman.

And whatever respect I had for Berkman died when those anti-trans lies hit the air.


"I'm the father of two wonderful little girls and spent years a a major league pitcher. As a dad, I would do anything to protect my daughters.,  As a major league ball player Lance Berkman does not speak for me, or any of the other fair minded guys in baseball.   Berkman's comments don't reflect the facts. Proposition 1 will not allow men in women's bathrooms.  It simply allows everyone to work hard and be treated fairly, no matter who they are, and that includes transgender people."

FYI, Section 28.20 of the Houston City Code of Ordinances is already on the books to deal with people who wish to go into bathrooms to commit criminal acts

The pro-HERO side is hitting back, and while I still have major problems with the slow response of Houston Unites to combat the negative media, they have released a TV commercial that is on air
But where the need is most critical is on Black radio and doing canvasing work in Houston's Black neighborhoods.   We also need to have trans POC people speaking uninterrupted against the lies of ou predominately Black faux faith based opposition.

And why hasn't Houston Unites deployed this gem from last year's HERO fight of suburban pastor Becky Riggle stating she has a 'right to discriminate'?

Hey love y'all, just asking the question that needs to be asked. This is civil rights malpractice to not use this 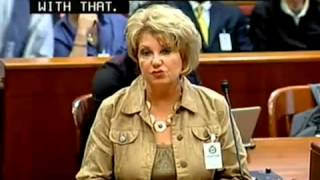 And why wouldn't you get Cassandra Thomas' video testimony from those HERO council hearings that emphatically debunks their predator lies?


Handle your human rights business Houston Unites.  Prove me wrong that you aren't as I and other Houston Black LGBT people and our allies distressingly see you as in terms of rerunning the 2008 Cali Prop 8 defense campaign.

A campaign, may I remind you that lost..
Posted by Monica Roberts at 12:00 AM