While I was in Washington DC, I discovered that I was staying a mere two blocks from St. Matthew's Cathedral, where Pope Francis is scheduled to have a private prayer event at noon with the US bishops.   St. Matthew's Cathedral FYI was where President John F. Kennedy's funeral was held after his assassination in 1963.

St. Matthew's Cathedral is also two blocks down Rhode Island Ave NW from HRC headquarters. After I noticed in the waning moments of a Thursday #OOTH2015 panel discussion news cameras rolling up and taking shots of the side of the headquarters building, I went outside and noticed this huge banner hanging on the side of the building facing St. Matthews.

While the media and many people are going gaga over Pope Francis and think he is this progressive figure vis a vis Pope Benedict  in the Catholic Church, frankly I and some of my trans kindred aren't feeling him and the hoopla surrounding the pontiff's trip and today's stop in Washington DC.

While I agree with Pope Francis on some of the things he has called out, I have a major problem with his anti-trans rhetoric. When it comes to transgender human rights issues,.many trans folks see no difference between Pope Frank and his predecessor.

We trans peeps haven't been feeling the love from the Roman Catholic Church since 2003, when Paul McHugh successfully implanted anti-trans dogma into the Vatican, and that anti-trans hate has spread to the flock. 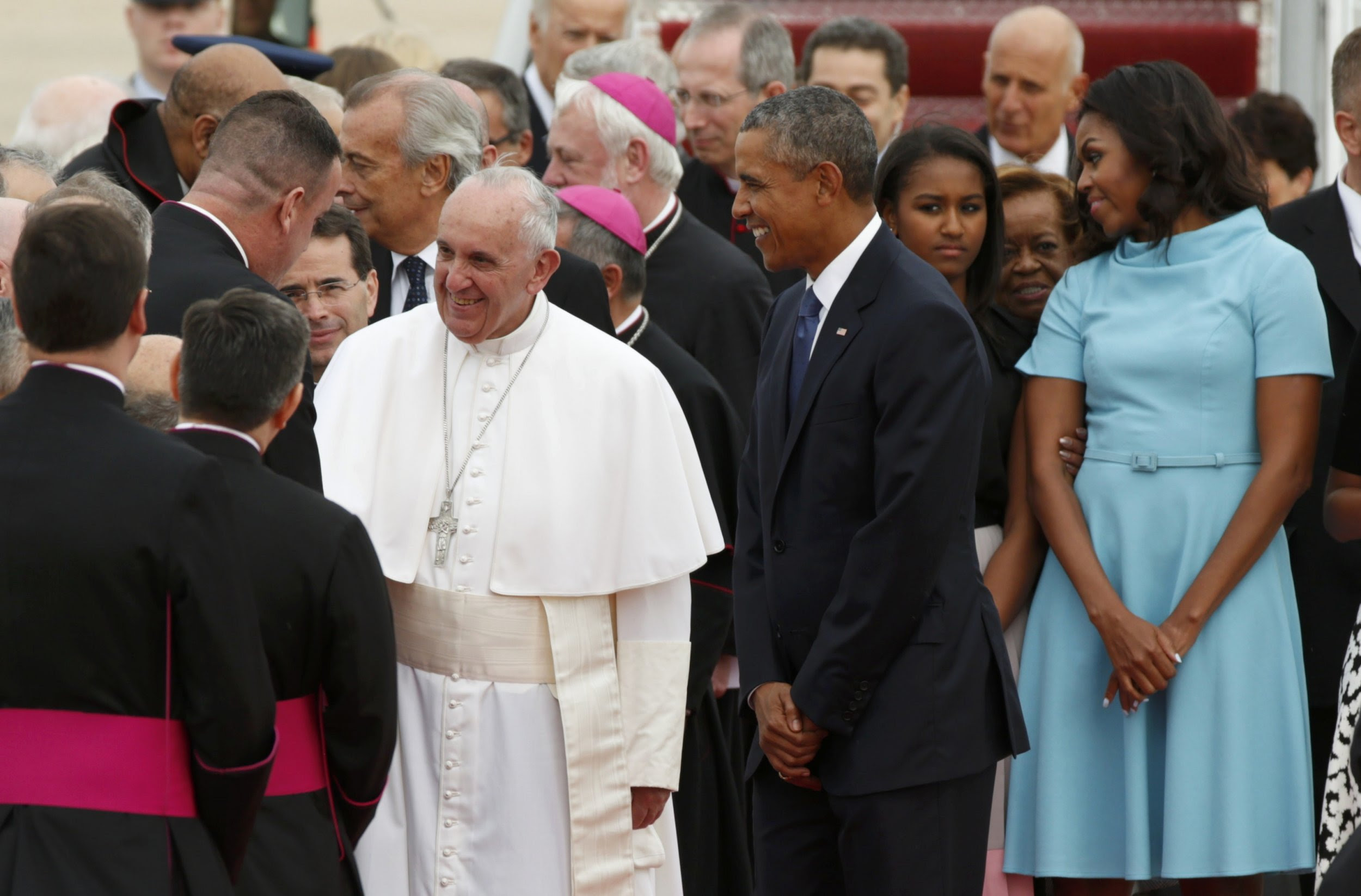 It's difficult to nearly impossible to feel warm and fuzzy about someone who has publicly compared your very existence to nuclear weapons. and has done little to reverse or cease and desist with the anti-trans dogma contaminating the Roman Catholic church conversations about trans people since 2003.

It's even more problematic for me because I am a Christian.

Y'all and the media may consider him 'the people's Pope', but it's obvious from the Roman Catholic Church perspective that trans people aren't included in being considered people.  I'm finding something else to watch because the all pope at the time saturation news coverage is irritating me.

The anti-trans hatred preached from Catholic pulpits and uttered by Pope Benedict, Pope Francis and other Catholic leaders from the Vatican to the local parish I believe is a factor in why trans murders in Brazil, Central America and much of Latin America have exponentially increased.

And I hope the trans folks who get to meet him at the White House convey to Pope Francis and others in that room just how pissed off we trans folks worldwide are about those comments and how they contribute to anti-trans hatred and violence not only here in the US but around the world.

The rest of y'all can go swoon over Pope Francis and succumb to Popemania.   Because frankly, I'm not feeling him,
Posted by Monica Roberts at 12:00 PM