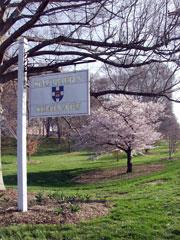 When I lived in Louisville, the house I lived in with my roomies was across the street from the Southern Baptist Theological Seminary, and one of my bedroom windows faced that cesspool of anti-LGBT bigotry.

In June 2011 the Southern Baptist Church voted to officially make hatred of trans people their church doctrine, and now Satan's Helpers are convening a three day trans hate confab on the SBTS campus starting on October 5.

Did the SBC invite Keith Ablow and Dr. Paul McHugh to attend this anti-trans hatefest too?

Looks like they'll be plotting their next steps in how to attack the trans community at this event now that they have lost on marriage equality and need somebody else to organize, attack and rally their flocks around.

There's a reason SBC church membership and attendance has dropped over the last 20 years, and this is just another example of the Southern Baptists century and a half history of being on the wrong side of human rights issues.

Too bad I'm not still living across the street from it, I'd be protesting it when it happens.

So when October 5 rolls around on the calendar for this reprehensible event, I wouldn't be surprised to hear that my liberal progressive colleagues in Da Ville are giving the assembled faith based haters a proper Kentucky welcome.
Posted by Monica Roberts at 12:00 AM