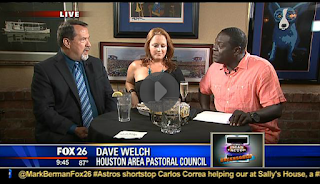 Y'all know I love my sis Nikki Araguz Loyd,  who is a kick butt activist in her own right fighting a now five year long battle to have recognition of her marriage to her late husband Thomas Araguz III restored.

The case is now at the Texas Supreme Court level, and in like of the Oberkfell SCOTUS ruling legalizing same sex marriage, it remains to be seen how this will  affect Nikki's still pending case.

Nikki was on FOX 26 last night not to talk about her pending marriage case, but to tangle with Dave Welch in a segment moderated by FOX 26's Isiah Carey.

Dave Welch is a longtime hater and professional gaybaiter who before heading the Houston Area Pastoral Council, the predominately white right wing group of haters that Max Miller and his Baptist Ministers Assn of Houston and Vicinity cooned it up for in last year's HERO fight, worked for Ralph Reed's Christian Coalition in Washington DC.

He's been back in Texas attempting to spread his special brand of hate with the aid of sellout non-white preachers like Miller and friends.

Note to Zoey Tur, this is how you deal with a right wing hater.

Here's the link to the FOX26 webpage if you can't see the video..

Welch is probably tired of getting his azz kicked when he tangles with Houston trans women.  First Cristan took him down to the point where he refuses to debate her any more, then moi, and now Nikki have made him look bad on local TV.

But hey, the existence of trans people is not up for debate, and neither is whether or not as Houstonians, Texans and Americans we should have human rights protection.

Anybody like Welch who thinks their religious beliefs and praying to Conservagod trumps human rights  is our enemy, and doesn't deserve our pity or respect.
Posted by Monica Roberts at 12:00 PM