2015 Williams Watch-On To The Semis 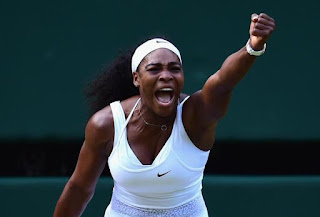 There was no rest for number one seeded Serena Williams as she took on 23rd seed Victoria Azarenka a day after an emotional fourth round match that sent Big Sis to the Wimbledon sidelines.

She was facing an opponent in Azarenka who while she has dominated her, isn't scared of playing with her either.

Azarenka got off to a great start, taking that first set 6-3. But if the Serena haters were starting to get giddy over the prospect of her getting bounced from Wimbledon, um no, not today.

This part of the tournament is Serena Time, and she handled her tennis business, cranked out 17 aces and took the second set 6-2 to even the match.  She then kicked up her tennis game to another level to take the third set 6-3 and punch her ticket to the semifinals

With the 3-6, 6-2, 6-3 quarterfinal win Serena is now 17-3 lifetime vs Azarenka, and a perfect 10-0 in Grand Slam tournament matchups against Vika. It was also her 26th consecutive Grand Slam match win.  Her semifinal opponent on Thursday will be Maria Sharapova, who is 2-17 lifetime against her and whose last victory over Serena came over a decade ago in the 2004 Wimbledon final.

Should she handle her tennis business as expected on Thursday, she would face the winner of the Agnieszka Radwanska-Garbine Muguruza semifinal for the 'Williams'-don ladies singles title on Saturday.

She's just two matches away from winning her 21st Grand Slam title, sixth Wimbledon crown, her second 'Serena Slam', and being a US Open win away from completing a calendar year Grand Slam.