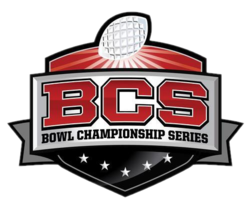 The nation's sporting attention turns briefly tonight from the chase for the NFL championship to the BCS Championship.   The venue will be University of Phoenix Stadium in Glendale, AZ for the title clash starting at 7 PM CST later tonight between the Number 1 ranked Auburn Tigers and the Number 2 ranked Oregon Ducks. 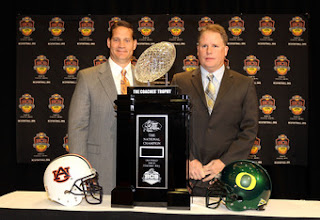 This BCS title game will not only be the first clash between Pac-10 and SEC schools, it's also the first that features teams who were not ranked at the beginning of the season.

The SEC has been dominant in BCS title game play, with its members running up a spotless 6-0 record in title games appearances.  Auburn is seeking to keep the SEC BCS championship game record unblemished at 7-0.

The Ducks are not only fighting to validate their pedigree as an elite football school and their first ever national championship, they are fighting for the pride of the Pac-10 conference.    This is the third Pac-10 appearance but the first for a team besides USC.

Should be a fun game to watch between two high octane uptempo offensive football teams.

As to which one leaves Glendale with the BCS Championship trophy later tonight?     While my heart is with the Oregon Ducks since it would be their first championship period, my football analyst brain says it'll be Auburn hoisting the trophy when the game is concluded