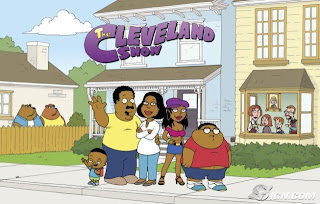 TransGriot Note: Another on point guest post from my brilliant and talented Canadian homegirl Renee of Womanist Musings


The Cleveland Show continues to be a hot mess. Week after week it targets the most vulnerable members of our society. MacFarlane has no witty repartee for the reduction of White, cisgender males of class privilege. Apparently men that look like him are above ridicule. Often the defence of his actions is that he picks on everyone, however; that is far from the case. The omission of White cisgender males of class privilege, speaks to who he values and whose power he is attempting to maintain.

This week MacFarlane decided to play with gender. 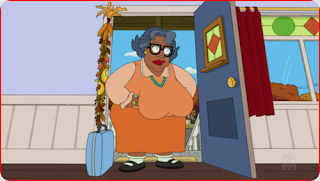 At first it seemed that he was taking a page out of Tyler Perry’s play book. The character Auntie Mama, is quite reminiscent of Madea. She is loud, abrasive and quite foul, taking pleasure in screaming outrageous as she farts loudly. Of course, Auntie Mama is revered by her family. It seems that despite his Whiteness, MacFarlane believes he knows the characteristics of the Black family.

Then the shift occurs, Cleveland discovers that Auntie Mama has a penis and immediately declares her a man. Auntie Mama clearly presents as a woman and lives her life as such and therefore; declaring her a man is highly transphobic. Rather than just admitting that trans people make the decisions that they do because their bodies are not aligned with their gender, Auntie Mama claims to have made the decision to live as woman after the death of Donna’s mother to give her feminine role models.

Cleveland then decides to corner Auntie Momma and demand that she declare that she is a man. Immediately Auntie Momma’s voice deepens and the rest of the episode is spent making jokes about her gender presentation. It was written as though she was deceiving those around her. This meme is particularly dangerous. The deceptive trans woman construction has lead repeatedly to murder and yet MacFarlane decided that this was just pure humour.

Of course, the deceptive trans woman then goes on to seduce a straight cisgender male. When Auntie Momma is outed by Cleveland, his father proceeds to vomit copiously and expresses shame for having in engaged in sex with Auntie Momma. It is absolutely not Cleveland's place to out someone? In the real world, such an action often ends in violence. Why is it necessarily shameful that a cisgender man engaged in sex with a trans woman? The response of Cleveland’s father is based squarely in the trans panic and homophobia. Isn’t MacFarlane great; two marginalizations for the price of one.

This entire episode was devoted to promoting transphobia and homophobia. It is particularly galling that this episode was aired right after the Transgender Day of Remembrance, which commemorates all those who have died because of trans hate in the previous year. When trans people are reduced in this way it leads to violence, which is hardly a laughing matter. Could MacFarlane stand at the graves of Ebony Whittaker, LaTeisha Green, or Taysia Elzy and justify his comedy as ironic? Could he look into the eyes of their grieving family members and even for one moment pretend that they had not suffered a terrible loss? 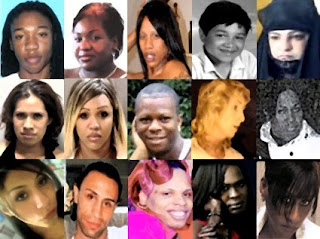 Not only is violence against trans women extremely common, it is even more so for trans women of color. Some would even declare this ongoing violence a war. In this battle MacFarlane has clearly chosen sides. To ensure that there was no mistaking his intent, he had the character Cleveland, call Auntie Momma a tranny repeatedly. MacFarlane was not giving some kind of ironic commentary regarding the lives of trans women, he was acting to maintain cis supremacy.

There will be those that will continue to defend such hatred as comedy, blind to the fact that the media is an agent of socialization. The media not only reflects common beliefs, it informs them through its active selection of how different bodies are constructed. I could turn off the television and avoid the barrage of offensive images, however; that would not protect me from the people that continually consume this kind of media uncritically. When undeserved privilege is routinely affirmed, it encourages the perpetuation of othering.

We know that othering leads to discrimination, poverty and in some cases violence. With this knowledge, how can we possibly declare sitcoms like The Cleveland show to be harmless? It is particularly galling that this episode played just days after the Transgender day of Remembrance, which commemorates all of those who died because of trans hatred each year. Despite all of the violence the trans community must endure, it was not until this year that someone was finally convicted of a hate crime in death of a trans woman. It took this long because we have demeaned and reduced their humanity. It takes extreme arrogance to laugh in the face of blood and violence. How many death notices do we need detailing the murder trans women to understand that such mockery devalues their lives? MacFarlane will not pay the cost for his actions because he is cisgender, white and male; it can be certain that a vulnerable woman will pay for his hatred.
Posted by Monica Roberts at 10:00 AM