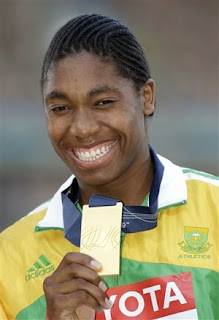 Well, well, well. We were expecting some serious drama and fireworks at this session of the International Association of Athletics Federations, the world governing body for what we call track and field in the States.

The IAAF Council is meeting in Monaco as we speak. When the Caster Semenya drama first exploded into the world's consciousness in the wake of her historic 800m victory at the World Championships in Berlin, the IAAF indicated they would wait until November and this Council Meeting to make a decision concerning the South African teen's international athletic status.

Peep this press release from the IAAF dated November 18, 2009

The IAAF, the South African Ministry of Sport and Recreation and Caster Semenya’s representatives have been and still are in discussions with a view to resolving the issues surrounding Caster Semenya’s participation in Athletics.

The IAAF will not comment upon the medical aspects of Caster Semenya’s case. The medical testing of the athlete is still to be completed.

There will be no discussion of Caster Semenya’s case at the forthcoming IAAF Council Meeting to be held in Monaco on 20-21 November 2009. No further comment will be made
on this subject until further notice.

The South African Sports Ministry in a statement posted on its website stated that the International Association of Athletics Federations has agreed to allow the 18-year-old Semenya to keep her prize money.

"Because Caster has been found to be innocent ... she will then retain her gold medal," the ministry said.

"Whatever scientific tests were conducted legally within the IAAF regulations will be treated as a confidential matter between patient and doctor," the sports ministry said. "As such there will be no public announcement of what the panel of scientists has found. We urge all South Africans and other people to respect this professional ethical and moral way of doing things."

White that's good news, it has yet to be confirmed by the IAAF. In addition, no definitive decision has yet been made about whether Semenya remains eligible to compete as a woman.

So stay turned, there will be another chapter it seems to the ongoing spots soap opera.
Posted by Monica Roberts at 12:40 AM