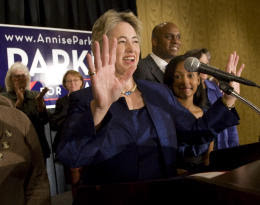 Was keeping a close eye on the mayoral election back in Houston last night. I was happy to see that city controller Annise Parker is headed to a December 12 runoff against City Attorney Gene Locke.

With 100 percent of precincts reporting in Harris, Fort Bend and Montgomery counties, Parker led the field with 31 percent of the vote, followed by Locke at 26 percent. Brown came in third at 22 percent, trailed by Morales at 20 percent. Three other minor candidates on the mayoral ballot totaled 1 percent.

Even though Parker led most of the night, she wanted to make sure her supporters knew that they had unfinished business.

“This race is not over,” she said. “Join me at headquarters tomorrow. We'll get back to work, and in five weeks, we'll claim victory.”

The runoff will have the element of history coursing through it. At the end of the night on December 12 Houston will either have its second woman mayor and first openly gay woman mayor of any large city or our second African-American mayor.
Posted by Monica Roberts at 8:08 AM