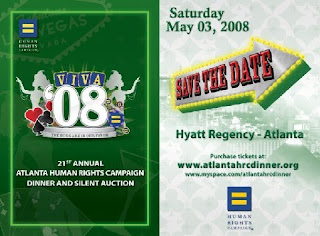 TransGriot Note: I've had the pleasure of meeting the Rev. Paul Turner at a 2004 SCC. His congregation at Gentle Spirit Christian Church in the ATL is GLBT inclusive, and Whosoever, a ministry he's an integral part of exists to provides a safe and sacred space for gay, lesbian, bisexual and transgender Christians to reclaim, rekindle and grow their relationship with God. Needless to say Pastor Paul is not happy with HRC's dissing of transgender people in l'affaire ENDA. Here is his open letter declining an invite to Atlanta's upcoming May 3 HRC dinner.

First, the e-mail inviting him to the dinner:

Thank you for the invitation...However, I will not participate with anything involving HRC until the Transgender Community is really part of the LGBTQI they so often say they represent.

There are those in our community who think I am being "childish" and "foolish" about this, however, I cannot nor will I stand with an organization which uses a part of our community as a political chess piece.

I cannot nor will I stand silently by while our sisters and brothers in the Transgender community are told they must wait for protection, or "they must understand we are not there yet". Every year I stand at the State Capital to hear more names read of our sisters and brothers who have been slaughtered. Yet, HRC does not see the need to take a stand on their behalf? The HRC really thinks it is OK to have just LGB?

I will once again say:

There is no going forward if everyone is not with us.

This is not Animal Farm where "All animals are equal, but some animals are more equal then others"!

HRC has made and continues to make a horrible and tragic miscalculation...a poll of 500 people does not speak for the entire LGBTQ community.

HRC sold it's sisters and brothers down the river for a bill they knew was not going to pass or have a chance in hell of becoming law. So what better time then to take a moral and courageous stand?

Does HRC not understand the Transgender community is in real and serious danger? When a house is on fire you don't stand outside and decide whom you are going to rescue, the attempt is made for all.

Of course what HRC has forgotten is it was these folks who started the whole “gay rights” movement we know today when they stood toe to high heal with the New York City police department at Stonewall.

HRC confidently forgets the Trans community has been with us every step of this bloody fight for our rights, our self worth and our very souls.

HRC forgets or ignores that each day when a trans person gets out of bed and steps into the world it may in fact be their last day.

If the hypocrites in congress don't want transgender people in a bill of protection for LGBTQI folks, then there should be no bill for consideration...not have HRC bargaining and agreeing that a part of our community is expendable and could simply wait for another day.

By not including Transgender people in any bill sent to the floor of congress y'all send a clear message to everyone concerned that the transgender community is somehow not on equal footing with the rest of the community.

This is wrong and HRC knows it. Pastorally speaking HRC has chosen to be the Esther who didn't bother to go before the King (Esther 4 New International Version).

Shame on you. I wonder how many Transgender people will die because even HRC does not think they are worthy of protection? This was and is a time for leadership, guts and courage.

It has been said a bill couldn't get through with Trans as apart of it, that it would be defeated...well my friends you may have won the battle with the US Congress but HRC has made themselves hypocrites in the truest sense of the word.

"The Human Rights Campaign is the nations largest civil rights organization working to achieve gay, lesbian, bisexual and transgender equality" Just where does the needs of the transgender community meet HRC's definition of civil rights if not within ENDA?

I know this doesn't mean a hell of lot to you, as I am not one of the high profile pastor's for which HRC has fooled into believing they care about the total community. Yet, how does one deal with a statement from your Executive Director which as it turns out was a flat out lie?

This statement was made in front of a room full of Transgender folks. So did your Executive Director mis-speak? Although I thought his statement was pretty clear. Are we to pretend this statement of support was just to say something nice to the trans community?

I cannot express how sad and disappointed I am in this organization. HRC should know that God's people are not expendable at any price!

The recent attempts to "explain" to "sooth", to "justify". to "spin" this despicable act on the part of HRC is arrogant, shameful and not worthy of a people who want our money so they can "fight for our rights"

I am no longer a supporter of HRC, I will not honor their name or pass on their e-mails with their weekly calls for money.

They will not again receive one dime of my money or the church's and I will certainly encourage folks to find other organizations to support with their hard earned money other then HRC. I do believe there are organizations out there that still understand the meaning of community and that without all the hard work of the Trans community we would be nothing.

There is talk of a calling for a boycott of the HRC dinner in Atlanta as well as any other HRC events in this city that seek our hard earned money. I am inclined to agree with boycotting the dinner and HRC in general. It is an appropriate way to send a message from Atlanta, the cradle of the civil rights movement that if we are not all protected by the law then none of us has protection.

No, I will not be going to this dinner and I would encourage anyone who has a basic sense of fairness, compassion and a sense of community to not go either.

I would encourage Rev. Dennis Meredith not to attend and accept an award from a group of people who are not willing to stand by all who are apart of the community.

That is a true servant of the Lord. May he live long, and lead a large flock.

I have known Pastor Paul since 2000, when he attended the first Atlanta Transgender Day of Remembrance. He became one of our strongest allies that night and has fought for us in ways others should learn from. I am not only a member of gentle Spirit Christian Church, but the VP of the Church's board.

There are five people in this world whom I consider my "best friend." Pastor Paul is one of them.

Mizz Helms, I maketh no guarantees 4 months out, but it looks like I might make SCC this year, possibly with Air Marshal Roberts navigating, or, perhaps, driving, if I can instruct her properly on how to drive my XRS. If we make it (have to get off work on a Saturday, but it should be possible this far out), perhaps we should join you for Sunday services, before leaving town.

But . . . my son gets married in California on October 4, the Saturday of Southern Comfort. I'll be able to mingle up to Wednesday night, but Thursday morning, I'll be flying out of town. I won't miss this wedding.

No, Monica H, don't miss that! Have a great time, we'll catch you around another time. I doubt we'll be arriving until after you've flown the coop.