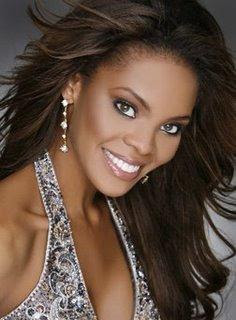 The Miss USA 2008 pageant will be held in Las Vegas this weekend, and that means that sistah Miss USA 2007 Rachel Smith will be crowning her successor.

I'll still be glued to the set watching this year's pageant because for the first time, the Lone Star State will be represented by a sistah.

Winning the Miss Texas USA pageant is tougher than winning Miss USA or Miss Universe. The Miss Texas pageant sometimes has more than 100 women competing, and many of those winners had to battle their way through local pageants in Houston, Dallas, San Antonio and other locales around the state just to get to the state pageant. Thanks to us pageant-happy peeps in Texas it's also one of the few state pageants in the Miss USA system that is televised live.

Miss Texas USA winners have a prolific history of capturing the Miss USA title. The Lone Star State representative has won Miss USA eight times, with a notable streak during the 80's in which a Miss Texas delegate captured the title five straight years. 1986 Miss Texas USA winner Christy Fitchner beat future Oscar winning actress Halle Berry for that year's Miss USA title and was first runner up for Miss Universe. However, with all that success, a Miss Texas has only won Miss Universe once.

The last Miss Texas to win the title was in 2001, and my fellow Cougar Crystle will be trying to end that title drought. I'll be rooting for her to do just that this Friday night and hopefully go on to capture Miss Universe.
Posted by Monica Roberts at 1:38 PM