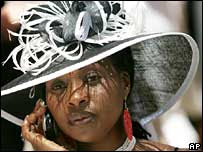 "I'm gay; I'm a drag queen; I love sleeping with men; I love having fun and I was born gay," says Kudah Samuriwo, cooling himself with a fan after a performance in a hot and sticky London theatre.

During the 1990s, Kudah courted controversy in Zimbabwe, where homosexuality is illegal, when he became the first black drag queen to win the Jacaranda Queen beauty contest - a crown usually worn by coloured (mixed-race) transvestites.

At more than 1.8m (six feet) tall, he models himself on African pop divas such as Brenda Fassie and Yvonne Chaka Chaka, whose name he used as his original stage name.

"To me a drag queen is something outrageous, more than a woman. I'm proud to be a man. I'm a drag queen because I'm different."

This in-your-face attitude put him on a collision course with Zimbabwe's President Robert Mugabe, who regards homosexuality as un-African.

Mr Mugabe infamously described gays as "worse than pigs and dogs" at the opening of the Zimbabwe's International Book Fair in 1995.

"That changed the world, just those words," says Kudah, who after subsequent harassment fled into exile to the UK.

Nearly four years on, he is taking a qualification to become a care-worker and is writing his show, Queen of Africa.

It is a work-in-progress - written in collaboration with Nigerian playwright Dipo Agboluaje - and is a funny, provocative and often moving account of his experiences.


"I don't know what Mugabe has against pigs and dogs; he must have had the worst sex ever with them.

"Maybe he's had gays as well that's why he makes comparisons. Experts can be so one-sided," he says during a workshop of the play.

Despite his outspoken performance, Kudah says he grew up a shy man "suppressing what I really wanted to do".

As early as seven years old he was aware that he was different, but as the eldest son of a local chief, coming out in such a conservative society was out of the question.

"I had to be an heir, a man who could go and hunt, so it was difficult hiding behind my mother's skirt," he says.

Kudah lost his virginity at 14 to a distant uncle, the night he returned from the post-independence war against the Ndebele people in the south of the country.

But it was not until he went to live in the capital, Harare, after leaving boarding school that his parents found out that he was gay.

To escape their anger he went to South Africa for several years, only reconciling with his family in his twenties after his father's death.

The play not only charts Kudah's personal story, but the crackdown on the gay community since 1995 when homosexuals have been repeatedly bribed, detained, beaten and sometimes raped by the authorities.

"My experience was very hard, because the policemen were clever. They would take us, arrest us and release us without charge, so we didn't have any proof," he explains.

Events organised by the Association of Gays and Lesbians of Zimbabwe (Galz), which he helped form, were often infiltrated by government spies.

"I would end up sleeping with them and teaching them about oral sex."

For Kudah, it has been HIV and Aids that has had the most devastating effect on the gay scene in Zimbabwe, where many cannot afford anti-retroviral drugs.

"Organising and attending funerals took a fair share of my time as one by one friends and relatives answered the roll call of death," he says in the play.

"We knew it wasn't a divine curse to punish us for what we are. Ignorance was killing more people than HIV."

In the end, it was the constant police intimidation - and petrol shortages that had crippled his minibus business - which prompted his departure.

He says he will not return to Zimbabwe until President Mugabe "has left", but he yearns for his former life.

"I had a nice car; I had money; I had friends to talk to in my language; I had a maid.

"I never used to do any washing, I didn't even know how to iron," he says.

Kudah now sees himself as a gay activist and "freedom fighter" and hopes his play will one day go into production so that he can continue "the struggle" and one day return home.

"A queen must protect her subjects even if the president refuses to do so," he says.
Posted by Monica Roberts at 2:09 PM