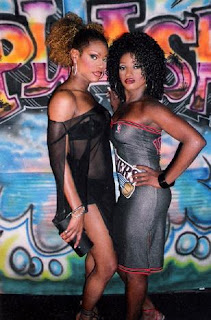 
During the summer of 2002 I wrote an article directed at the
Caucasian male to female transsexuals in the community. I stated to
them that they are now considered whether they like it or not,
minorities, and the old rules of white male privilege that they are
used to operating under don't apply. Some of my own people have hard
heads too, so I'm now going to turn my attention to African-American
transgendered peeps.

I've been observing the Black GLBT community since the early 80's, and
I've been considered one of the trail blazing leaders in the national
trans community since 1998. One of the things that I admire about the
Caucasian trans community is that there is far more discussion and
information sharing concerning the process of transition than among
my own people.

And why is that happening? I believe that too much time is spent in
the African-American trans community focusing on having sex and
partying instead of intelligently discussing the process that leads
to us becoming recognized in the eyes of mainstream society as a
female. I witnessed too many Black T-girls who allow their lives to
get wrapped up in the short term pleasures of having a 'husband' or
finding 'trade' to sleep with for the night. There is much more to
being a woman than swallowing estrogen, developing a feminine body,
and spreading your legs or bending over to screw everything that
moves. That short-sighted thinking is dangerous, and has probably put
the entire African-American community at risk.
When studies like the 2000 Washington DC Transgender Needs Assessment
show that 32% of our sisters are HIV-positive out of a sample group
of 250 people, it's time to consider a new game plan.

Another is the fact that those T-girls who have acquired the
knowledge on how to transition jealously guard it like the secret
recipe for Kentucky Fried Chicken. The persons who've already
transitioned want to cut out the potential competition. I remember
bumping into that problem when I was trying to find out how to get
the process started back in 1981. Most of the girls I asked were
tight-lipped on where they got their hormones, who did their hair,
or the other points of Transition 101. They ignored me instead
of seeing me as another human being who wanted to get to the place
where they were. They had forgotten the cardinal rule of the African-
American community: Each one, teach one. The spread of the
Internet has largely eliminated this problem, since much of the
information that I was seeking at that time is readily available
online.

Just once I'd like to see discussions for example, on what's
happening with T-sistas in various parts of the country. I'd like to
see us form our own organizations so that we can openly discuss
what's on our minds, and try to bridge the gaps between the
professional T-girls, the club T-girls, and the street T-girls.

I'd love to see T-sistas show up in significant numbers one
September at Southern Comfort in Atlanta or have our own.
I'd love to have conversations with them about aspects of the
transition process that are working their nerves. I've love to be
able to network with other T-sisters to build a foundation for a
nationwide support apparatus. I'd like to see African-American T-
sisters write about their feelings, how they grew up,
what drama they dealt with, what age they started the change, and
have them published in gay and straight media.

Most of all, I'd love to see the professional T-girls come out, if
possible,and become role models for the next generation of T-kids.
I'm in contact with many African-American T-girls who are college
educated. Some are holding advanced degrees. They are working in
various professional fields, and a few I know are wives and mothers
successfully raising children.
It's sad that unlike Caucasian T-kids, many of our T-kids have never
been exposed to a successful professional T- person who looks like
them. That's critically important in building our T-kids self esteem
and showing those kids that there is another path besides sex work
to a better life.

Finally, we need to impress upon people that transition is a slow
time-consuming process, and a major life altering decision. There
are no shortcuts, so put the silicone away. Your mother and your
sisters had years to learn everything about Femininity 101, and their
bodies developed over time. In my case, I started transitioning at
age 27, so I not only had to learn everything about femininity (and
I'm still learning at age 40), but at that moment I needed to have
the level of knowledge appropriate for a 27 year old Black woman.
The rub was that I didn't have 27 years to learn it.

How I did it was asking questions of my genetic female sisterfriends,
accepting the advice that they gave me, and observing their behavior
in various social situations To paraphrase the old joke about
getting to Carnegie Hall, the best way to become a woman when you
weren't immersed in femininity at birth is practice, practice,
practice. Much of my early progress in assimilating into Black
womanhood happened because of the help I received, and still get to
this day.

We Black T-girls have a lot to live up to. Black women are the
mothers of civilization, and we have a long, proud history of
achievement and success despite tremendous odds. I look at it as an
honor and a privilege to finally become part of that sacred circle
after being on the outside looking in for so long.

Anybody else care to join me?
Posted by Monica Roberts at 2:15 PM