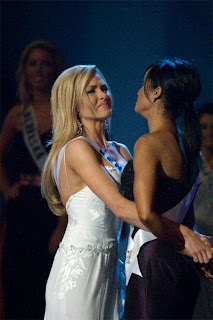 Despite developing a "party girl" reputation and even breaking the law by engaging in underage drinking, Miss USA Tara Conner will keep her crown, knocking down any chance of first runner-up Tamiko Nash taking over the title.

In a press conference Tuesday, Donald Trump, who owns the Miss Universe organization, said he would not dethrone Conner, whose alleged behavior has come under serious scrutiny in recent days. The former Miss Kentucky has reportedly been caught drinking in numerous New York nightclubs, engaging in an open mouth kiss with the reigning Miss Teen USA and been involved in flings with some of Manhattan's most eligible bachelors.

But Conner, who is white, stood by Trump's side as he publicly issued a vote of confidence, calling his wayward beauty queen "a good person." Had Trump pulled the trigger and sent Conner packing, Nash would have stepped in becoming the fifth black woman to hold the Miss USA title. Instead, Nash remains in her current role while Conner keeps the crown -- and enters rehab for drinking and after allegedly testing positive for cocaine.

"I've always been a believer in second chances," Trump, who owns the Miss Universe Organization, said at a podium inside the atrium of Trump Tower along New York's famed Fifth Avenue. "Tara is a good person. Tara has tried hard. Tara is going to be given a second chance."

According to reports, Trump was prepared to dethrone Conner, who just turned 21 Monday, before meeting with her prior to the scheduled press conference. However, he chalked up Conner's behavior to what happens to many small-town women who come to New York, the city that never sleeps.

In 2002, Miss Russia Oxana Fedorova won the Miss Universe pageant but was stripped of her title after violating her contract. Trump said Fedorova didn't show up for some photo shoots and charity events. It was the first time a titleholder had been ousted in the contest's more than 50-year history. Fedorova denied she was fired and said she gave up the title voluntarily.

In Nash's home state of California, many people have been talking about the controversy and the apparent blind eye given to Conner.
Paula Kimber, publisher of the California Advocate, a Black newspaper, said she disagrees with Trump's choice.

"The general feeling here is that if the races were the other way around, it wouldn't be the same result," Kimber told BlackAmericaWeb.com. "I couldn't imagine (Nash) keeping the title if it had been her who did all of this stuff."

This turn of events has many looking back to the mid-1980s when Vanessa Williams was forced to relinquish her crown when nude pictures of her, taken before she became the first Black Miss America, surfaced. Williams, who went on to have a professional
acting and singing career that could be envied by other beauty queens who served out the duration of their reigns, was thought unfit to represent a title that makes its holders an instant role model.

Melissa Lacewell Harris, a political science professor at the University of Chicago, said the situation speaks volumes about white privilege in America.

"Giving her a second chance is indicative of how White America works.
It's true for everyone from white fraternity boys to even people like George Bush, who can have mediocre grades and a failing international war and still be given a second chance," Lacewell Harris told BlackAmericaWeb.com.

"Over and over again, the mistakes young white people make are not held against them," Lacewell Harris said, adding that, if true, Conner's behavior don't seem to flow with the family values that a person in her position should display. "But when young Blacks make mistakes, it more than likely limits their opportunities forever.

"For the privileged people, whether it is white or the wealthy, they don't have to live perfect lives to have equal opportunities," Lacewell Harris continued. "They're allowed to make mistakes and even fail. Yet with (blacks), any moral misstep or miscalculation can lead to a lifetime of pain."

While some may feel as if debating whether or not Conner should keep her crown is a trivial matter, Lacewell Harris said, this latest turn of events could address some larger, more compelling issues plaguing society.

"This type of scenario is a litmus test and sets the stage for what's possible, not only on the cultural front but in a political sense," she told BlackAmericaWeb.com.

"In a certain way, the way Barack Obama is playing with the idea of running for president leaves us in the position where we need to asking are we ready for Black leaders," she added. "If there's a sense of discomfort of going to a Black girl when there's a problematic white girl holding the crown, maybe Barack should wait."
Posted by Monica Roberts at 8:06 PM