Rethinking How We Think About Voting

Now that we're in the early voting phase of our primary election in Texas until May 25 and we're less than six months away from a crucial presidential election, I'm finding myself pondering quite often what's up with the vanillacentric progressive left and why elements of them don't put the same value on voting and being front and center in line on every election day as many non-white progressive left people do.

It's a discussion we have quite often in Afrocentric beauty and barber shops and our chococentric family gatherings.   It's driven by far too often heard and read comments from vanillacentric liberal progressive circles and our own stupid knee-grows the refrain that 'I'm voting for the lesser of two evils' or 'I'm sitting out this election'. 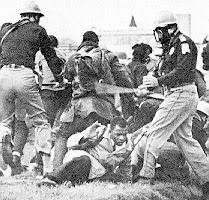 Frankly, the folks that utter the second one get on my last damned nerve.  I look at, shake my head and call them clueless under my breath as visions of the beatdown now Rep. John Lewis (D-GA) and others took at the Edmund Pettus Bridge by Alabama state troopers on Bloody Sunday play back in my mind.

And once again, maybe it's a cultural thing.  You value most what was denied to you or your oppressors are hellbent (see ALEC sponsored voter ID suppression laws as a prime example of that). in trying to take away from you.  It's also never far from our minds that people shed blood and sacrificed their lives in order for us to get our precious right to vote.  .

Those statements are uttered far too frequently from people who want a third party in the United States or who support third party candidates because they don't like the Democratic or Republican candidates for whatever reason.

But the bottom line is that the ballot is the most powerful weapon in your arsenal to change society.  Direct action protest only highlights the issues of the day.   It is legislators who have the power to enact law that will correct the issues you highlighted by doing your protest, and you have to show up on election day to put those folks who support your policy positions into office and keep them there.

The sooner some of you peeps on the left get that through your heads the better.

To break it down for you, it should be painfully obvious by now that you can't get liberal-progressive legislation to come out of a conservative legislator.   You .much take your behinds to the polls and vote for the people at the civil, county, state, and federal level to enact the type of change you wish to see happen.

You aren't going to get progressive change if you continue to be stupid enough to sit out elections because you're not happy with how it's gridlocked at the moment.   You peeps sitting out and not voting is a contributing reason why it's fracked up. 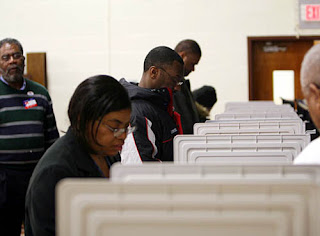 I know from my people's history that voting is important.  It has been drilled into me since I was a toddler and when I turned 18 one of the things I received in addition to a birthday card with money stuck inside it was a voter registration one

So yes, I place a high importance on voting and will be exhorting people through this blog from now until the deadline day to get registered to vote and showing up on November 6 or whenever you state's early voting period occurs knowing that low turnout elections favor conservafools.

They know it too since they have been busy since January 2011 trying to supprsss votes in advance of the 2012 presidential election.

I also don't look at it when I step into the voting booth as me voting for 'the lesser of two evils'.  I look at it as who is the best candidate that not only reflects my values but will fight for and enact through liberal-progressive legislation the policies I wish to see implemented in my city, county, my state and this nation? 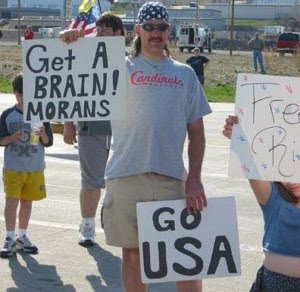 So it's not only time that vanillacentric liberal progressives understand how important voting is in achieving our goals, they begin to wake up and smell the coffee that while they're bitching about the political system, the Tea Klux Klan and the conservafool movement are mobilizing to ensure the system the vanillacentric 'libruls' hate so much stays in place.

Your vote is your voice.   Sounds simplistic, but if you don't use it, the other sides voices will be heard loud and clear as they were in 2010 and you'll get jacked up policies you didn't want becoming the law of the land as a result of that.