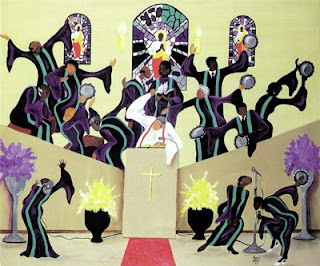 And I and many African descended Christians, cis, gay and straight are getting fed up with that far too often projected lie being aimed at an institution that is the centerpiece of our culture.

That distinction based on the overwhelming mountain of evidence is white dominated fundamentalist churches and right wing Christian denominations who have had a foaming at the mouth hatred of GLBT people and pimped it since the 70's for fun, profit, political power and influence.

It wasn't Black churches who spent $28 million dollars like the Mormons and Catholic Church did to finance the 2008 Prop 8 campaign in California.

When it comes to pimping faith based homophobia and transphobia, no one excels at it better than white fundamentalist churches.   They not only are the architects and primary catalysts for many of the anti-TBLG human rights petitions and referenda, they finance them, provide the foot soldiers for the petition drives and campaigns and vote overwhelmingly to restrict and deny human rights coverage to others.

And as a group of white North Carolina ministers were prime examples of, persist in spewing hate speech from their pulpits.

As people like Rev Al Sharpton, Bishop Yvette Flunder, Rev Dr. William Barber and a long list of pastors are emphatically demonstrating, that 'uniquely homophobic' meme aimed at the Black church is questionable