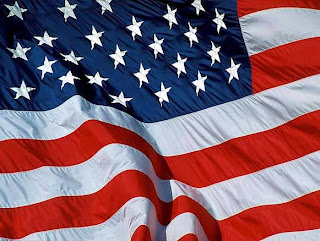 Why Is The GLBT Community ‘Scurred’ of Old Glory?
Copyright 2007, THE LETTER

Something’s missing when we have any kind of press conference, protest, or other function in the GLBT community.

I find it odd that the flag is absent from many GLBT protest events. (I’m not talking about that rainbow version of the US flag, either.) I’m talking about the red, white and blue one with the 50 stars and thirteen stripes on it. You know, the one that was planted on the moon in 1969.

One of the things I see as a failing of those of us on the progressive side of the culture war is ceding control of our national symbol to the Christobigots. It lends credence to their propaganda spin about us that we’re anti-American when we don’t fly the flag at our events. The US flag is not a bought and paid for campaign decoration for the Religious Right, Fox News or the Republican Party. It belongs to all of us. We need to make that clear by resolving to use it at every opportunity to erase the perception in the Fox-watching masses minds, some of our own peeps and
mainstream Americans that it is.

Other protest movements have not had the aversion to the flag that I’ve seen in GLBT activist community circles. I point out that the US flag was carried during Civil Rights movement marches. When Vietnam War protesters weren’t burning them they carried Old Glory along with their peace version. Even the immigration protesters began carrying it when the nationally televised marches of them carrying Mexican and other national flags began generating a backlash against their cause.

We in the GLBT community need to proudly display it as a reminder to ourselves and our opponents that we are American citizens, we have constitutional rights and we demand that they be respected and defended irregardless of whether you like us or not.

To the folks that argue that it causes conflicting emotions in the GLBT community: And your point is?

If any peeps in this country should have a putrid hatred of that flag it should be African-Americans along with Native Americans. But both groups have fought and died for it in combat, held protests accompanied by it, hang it on our doorsteps and have it at places of honor in our communities.

I’m not a Faux News patriot. I love my country and deplore what has happened to it in the last seven years. I will praise it when it does the right thing and like any patriot will call it out when it’s on the wrong side of an issue. I am horrified that our country’s good name has been besmirched by a group of arrogant boobs in an unbelievably short time. But don’t turn anger with the administration into playa hating on the flag.

To many people on Planet Earth the US flag represents hope, justice, freedom, equality and fairness. Aren't those the same values that we're fighting for in the GLBT movement?

Just simply flying Old Glory will take away one more lie they use to demonize us and garner support for their anti-constitutional agenda. It may even get us some support from those American flag bumper sticker voters when we need it.

So don’t be ‘scurred’ of the flag. Get in touch with your patriotic side. Your country will thank you for it later. Put your right hand over your heart, face the flagpole and repeat after me.

I pledge allegiance to the flag
Of the United States of America
And to the republic for which it stands
One nation under God
Indivisible
With liberty and justice for all
Posted by Monica Roberts at 3:14 PM

I AGREE! Here's to Old Glory!

I can appreciate your perspective, and you make some wonderful points.

While I am grateful for the freedoms that I enjoy and for the sacrifices that so many have made that have allowed me these freedoms, I pledge my allegience to the principals of compassion and freedom and not to one specific government or landmass.

The flag is a symbol that represents different things to different people. For some it represents freedom and civil rights. For others it represents arrogance and hypocrisy and imperialism. To me, it means little.

If someone wants to know what values I stand for, they don't need to look for a flag. They just need to watch what I do and listen to what I say.

But as long as we are living inside the borders of the United States, Canada, or whatever country we happen to be born in there are certain culturally significant values wrapped up in the flags of the nations of the world and they take on meanings far beyond being simple pieces of cloth.

Yes, I try to live the values that others only disengenously lecture about and don't need a US flag bumper sticker on my car to say that. My actions do.

However, when you are talking about a political movement that is fighting to have their constitutional rights respected and not trampled on by the tyranny of the majority, symbols matter.