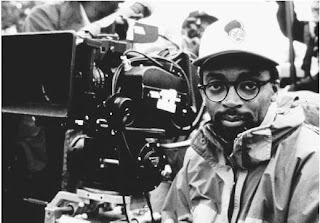 In addition to March 20 being the first day of spring (hallelujah) today is also Spike Lee's birthday. He was born in the ATL 50 years ago on this date.

Spike is one of my favorite filmmakers. I remember when I rolled over to the River Oaks Theater back in 1986 to see She's Gotta Have It. It was the first time I'd gotten a chance to see a movie with an all-Black cast since I caught The Wiz back in my high school days. After seeing that movie I made it a point not to miss a premiere weekend for a Spike Lee Joint until 1994. I also have many of Spike's movies in my personal DVD collection.

One of the interesting things about Spike Lee movies in addition to them being topical is the long list of people who have acted in them and later became big stars on stage, screen and television such as future Oscar winners Halle Berry and Denzel Washington. Danny Aiello, John Turturro, Eriq LaSalle, Queen Latifah, Jasmine Guy, Laurence Fishbourne and Samuel L. Jackson have also been in Spike's movies and some people have acted in more than one Spike Lee joint such as the late Ossie Davie and Wesley Snipes.

He has also done highly acclaimed documentaries such as 4 Little Girls and the recent When The Levees Broke for HBO.

I also loved those humorous Nike Air Jordan commercials he directed in which he reprised his Mars Blackmon character from She's Gotta Have It.

One thing I adore about Spike is that he's never been shy about expressing his opinions about various subjects. Spike gets much respect from me for that. He also gets much love from me as a movie fan for resuscitating our legacy of filmmaking that goes back to the great Oscar Micheaux and inspiring a new generation of filmmakers to pursue their dreams.

Looking forward to seeing him win that elusive Oscar one day and the James Brown biopic that he's been signed to do when it comes out next year.
Posted by Monica Roberts at 8:45 PM

Happy birthday, Mr. Lee! .. Though I love almost all of his movies, two that always stand out for me are 4 Little Girls and Get on the Bus, that great movie he made about going to the Million Man March

I like School Daze myself. The fight scene at the step show brought back memories ;)