I just read the announcement on the Blue Bell website that stores in the Louisville area and within 100 miles of Da Ville will start selling Blue Bell on March 12.

I have been eagerly awaiting this day ever since I moved here.

For those of you not fortunate enough to live in the 16 states (and Indiana will make number 17) where you can buy Blue Bell or don't get to Carabbas or Outback Steakhouse very often you are missing a treat.

The ice cream is legendary in the Lone Star State. As a matter of fact, when I went to Dallas last November for my cousin William's wedding one of the first things I did after arriving there was have a pint of Blue Bell Homemade Vanilla. I gobbled up another one when I stopped in Hope, AK to see the Clinton birthplace and gas up on the return trip.

To a native Texan, eating Blue Bell is a slice of home. No matter what your favorite flavor is, be it mint chocolate chip, pralines and cream, butter pecan, chocolate, chocolate sundae or cookies and cream, it gets eaten in mass quantities. If I was depressed or down about something all it took sometimes to get me out of my funk was a half gallon of Blue Bell homemade vanilla and a bottle of Hershey's chocolate syrup.

For a long time it was only sold within a 100 mile radius of their creamery in Brenham, TX just northwest of Houston. During the 80's and 90's they gradually expanded the distribution to the rest of Texas and neighboring states. I remember one 1989 weekend trip I took to New Orleans in which my godsister Angela requested that I bring a half gallon of homemade vanilla with me.

Blue Bell is also celebrating its 100th anniversary this year with special events, an ice cream flavor naming contest and a traveling exhibit that will cover 66 cities. (So far Louisville isn't on the itinerary yet, darn it) 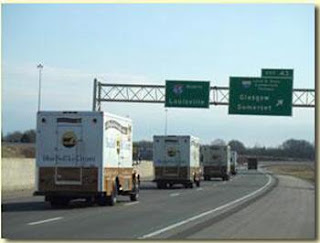 Hey, I'm elated that I'll get to happily devour the 'best ice cream in the country' again. The best part of the whole deal is that I won't need to go to a restaurant, have it shipped or travel a few hundred miles to eat Blue Bell any more.
Posted by Monica Roberts at 3:31 PM

i live in the chicago area....but am from texas. when i saw that blue bell is going to be in indiana, i nearly cried. i miss blue bell. mmm, dutch chocolate!

I did the same thing when I found out it was FINALLY going to be sold here.

I've already polished off most of the first half gallon of homemade vanilla I've purchased since March 11. My roommate who swears that she can't stand Blue Bell I caught eating a bowl of my ice cream two nights ago.

I'm going to have to start buying multiple cartons of it.

Where did you get the cool pictures of the blue bell trucks?