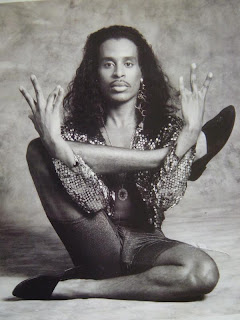 NEW YORK (AP) — Dancer Willi Ninja, a star of the documentary "Paris Is Burning" who was considered the godfather of the dance art form voguing and who inspired Madonna’s "Vogue" music video, has died at age 45, friends and relatives said last Tuesday.

Madonna, speaking through a spokeswoman last Tuesday, said she was sorry to hear of Ninja’s death.

"He was a great cultural influence to me and hundreds of thousands of other people," she said.

Voguing, which dates to gay Harlem ballrooms in the first half of the 20th century, consists of a combination of model-like poses and creative arm, leg and body movements.

Ninja, inspired by Fred Astaire, "Great Performances" on PBS, Asian culture and Olympic gymnasts, was a self-taught performer who stitched together a patchwork of a career that covered the worlds of dance, fashion and music.

He performed with dance companies, worked under renowned choreographers and instructed models and socialites how to walk and pose for the paparazzi with frisson.

But it was for the magic Ninja worked on the ballroom floor and his appearance in the 1990 documentary "Paris Is Burning" that he was probably best known.

The documentary chronicles the elaborate ball competitions in which participants walk in various categories or themes and are judged on the realness of their drag impersonations. On a deeper level, the balls are spins on issues of gender, class and race expressed through performance, observers say.

Ball participants are known as children of houses, improvised families that often serve as havens from hardships such as homophobia, poverty and racism many members face.

"Paris Is Burning" director Jennie Livingston said that Ninja was a "supremely gifted dancer" who was extremely focused and dedicated to his craft and that he was "one of the main reasons" she made the film.

The filmmaker also noted Ninja’s warmth and ability to guide, nurture and love those around him, particularly the children in the House of Ninja, which he founded in the mid-1980s.

She recalled walking through Washington Square Park one summer day and spotting young men voguing beneath a tree. She approached them to learn about this dance, which was new to her.

"’If you really want to talk about voguing you should meet Willi Ninja,"’ Livingston said the young men told her. "That’s where I first heard his name.

"Whenever you talk about vogue or voguing, Willi’s name is there," Livingston said in an interview last Tuesday. "Willi refined voguing. He really brought it to an amazing level."

Eventually Ninja vogued for audiences in Paris and Tokyo, Livingston and others said.

Ninja, whose real name was William Leake, was born April 12, 1961, in New York and grew up in Queens. He graduated from Bayside High School and studied for a year at Queens College, according to a copy of the program for his funeral, which was scheduled for last Friday.

Ninja’s mother, Esther Leake, of Queens, said: "He was my best friend. I loved him to death. Nobody else is going to be like him. He was one of a kind. He loved people, and he’d do anything for anybody."

Archie Burnett was best friends with Ninja. He said Ninja was influenced and fascinated by Asian culture growing up in Queens, which has a large Asian population, and during a stay in Japan.

"His style of voguing was a combination of martial arts, East Indian and Asian influences, ballet, gymnastics, contortionism and pantomime," Burnett said. "That’s what made him different. He really wanted voguing to be respected."

"Willi was not into being a stereotype, and if it meant he wouldn’t have the opportunity to put on a show and have international access by way of television he would not do it," Burnett said. "He was a man of principle. He fought for his integrity."

Ninja did, however, do commentary for the "Paris" DVD, which was released last year.

More recently, he had met with a theater director about choreographing a Broadway or off-Broadway version of "Paris is Burning," Livingston said.

"It could’ve been beautiful," the director said.

A viewing was held last Friday at Roy L. Gilmore’s Funeral Home in Queens, followed by a funeral. Ninja’s remains were cremated the following day.
Posted by Monica Roberts at 4:14 PM