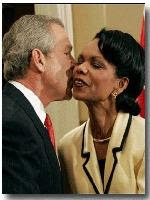 What is wrong with Condoleezza Rice? Where's the DROP Squad when you need them?

In a recent interview with Essence magazine, Rice said that Blacks
folks might have been enslaved much longer than they were if the
North decided to end the American Civil War earlier than it did.
"I'm sure there are people who thought it was a mistake to fight the
Civil War to its end and to insist that the emancipation of slaves
would hold," she told the magazine.

"I know there were people who said, 'Why don't we get out of this
now, make peace with the South, but leave the South with slaves?'"
A fuming Rice went on to say that she wasn't too pleased about how
people attacked President Bush's administration in the aftermath of
Hurricane Katrina, saying that his slow response was because the
majority of the victims were Black.

"I resented the notion that the president of the United States, this
President of the United States, would somehow decide to let people
suffer because they were Black," she told Essence.
"I found that to be the most corrosive and outrageous claim that
anybody could have made, and it was wholly and totally
irresponsible," Rice said, adding that the government did it's best.

I have not liked Condoleezza Rice ever since I read her comments in a 1999 Time Magazaine article that quotes her as calling President Jimmy Carter (a man she worked for by the way before she swiched parties and joined the dark side of the force) 'a stupid man unfit to be president.'

I found it quite odd that someone who grew up in 1963 Birmingham and claims to have been friends with Denise McNair (one of the girls killed in the 16th Street church bombing) could have NO respect for the civil rights movement and its brave warriors, especially when some of the major events in that struggle happened in your hometown and home state.

Too bad she didn't grow up with the social conscience of her cousin
Constance Rice or the activism of fellow Birmingham resident Dr. Angela
Davis.

How DARE she equate Americans who oppose Iraqinam with being pro-slavery.
I'm sick of negro conservatives trotting out the slavery references to bash their critics with. Whether its Clarence Thomas complaining about 'high-tech lynchings' or negro conservatives comparing the Democratic Party to a plantation, this crap is getting old.

Miss Thang can get pissed all she wants about the criticism being leveled at her boss over the glacial Katrina response. She has no room to talk. She was in New York hunting for a good deal on Ferragamos while New Orleans was drowning.

So yeah this may be news to you Condi, but your beloved GOP has carried out an anti-Black agenda for 40 years. You have earned the skewering you're getting for that jacked up Katrina response. You're upset about Kanye West's 'George Bush doesn't care about Black people' statement? Too bad.

It's glaringly obvious when four hurricanes hit a GOP controlled state during the 2004 election season and gets a swift response but a year later it takes a week for supplies to get to an area that is majority Black, voted 3-1 for Kerry in the 2004 election and has a Democratic mayor and governor. It's even more exasperating when a few months later lavish levels of relief supplies get sent halfway around the planet for the Asian tsunami victims in a time frame measured in hours.

I'm beginning to wonder if Kanye West's comment also applies to you, Condi.
Posted by Monica Roberts at 1:07 AM

I agree with her assessment of jimmy carter.

but I could hardly disagree with his politics more. I think he is the worst president in modern history.

in one of your posts, you praise clinton's presidency and point to the strong economy.

what do you make of the economy under carter?