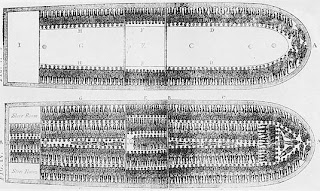 And so began slavery in America -- with the first 20 Africans being
referred to with a word that retains its sting some 400 years and 30
million African Americans later.

As Jamestown begins a commemoration of its founding in 1607, this
less-than-cheery subject poses a special challenge for party
planners. Jamestown is distinguished as the first permanent English
settlement in what would become the United States; but it was also
the first to achieve what historian Paul Johnson called "self-
sufficiency through the sweat and pain of an enslaved race."

Can such an epic injustice ever be part of a celebration?

On Oct. 14, the Virginia African American Forum will be among the
first to try with an anniversary gala at the Jamestown Settlement
museum. Guests will be treated to a jazz ensemble and a preview of a
new collection of African artifacts. They will also be given a choice
of dress: "After 5 or African attire," allowing them to identify
symbolically with the painful past. Or not.

The museum exhibit, on the other hand, may not offer such an easy
out. A group of transatlantic researchers has finally put a face on
those anonymous 20. And as more is learned about how their stories
began, there will be no escaping the pain of their tragic end. The
slaves were from Angola, in Southwest Africa. Their homelands were
the kingdoms of Ndongo and Kongo, regions of modern-day Angola and
coastal areas of Congo. They were entrepreneurs, a literate and
morally upright people who held family in the highest regard. They
were renowned for preparing their children for adulthood -- and the
tradition persisted even after the slave ships began to arrive.

Thanks to the researchers, what had been a central feature of
slavery -- the dehumanization of the black slave -- has finally been
personalized for the first of the millions who would follow.

Nevertheless, by what appears to be the mutual consent of blacks and
whites, the horrors of slavery are rarely confronted head-on in
public settings. In fact, the effects of this "peculiar institution"
are more likely to be minimized. It is often noted, for instance,
that those first Africans were actually indentured servants, not free
but not slaves, and, theoretically, as eligible as white servants to
work themselves out of servitude. But if black sharecroppers could
not work off a perpetual debt in the 20th-century version of
indentured servitude, what chances did Africans forcibly brought here
in the 17th century have?

At a recent fundraiser for the U.S. National Slavery Museum planned
for Fredericksburg, organizers made sure that talk of this most
unsavory practice did not leave a bad taste. "This museum will not
have bad karma," Bill Cosby said at the event, which drew about 1,350
people. L. Douglas Wilder, mayor of Richmond, former Virginia
governor and a driving force behind the museum, told The Post: "We
are not interested in pointing a finger of blame."

But the psychological effects of slavery are not so easily dismissed.
The generational echoes of oppression reverberate even today in the
social crisis affecting many black families. And the same term of
disrespect that Rolfe used to describe the slaves has never been more
popular among black youth. The problem, of course, is not so much the
use of the word as the internalization of its meaning: to eschew the
freedom that comes with education and volunteer instead to enslave
oneself with a minstrel-show mentality.

Slavery, if not the slavery museum, most certainly has bad karma.

Johnson, the historian, asks: "Can a nation rise above the injustices
of its origins and, by its moral purpose and performance, atone for
them? In the judgmental scales of history, such grievous wrongs must
be balanced by the erection of a society dedicated to justice and
fairness. Has the United States done this? Has it expiated its
organic sins?"

America lost its soul in Jamestown. It's time to go searching again.
Posted by Monica Roberts at 11:36 AM