Is It November 7 Yet? 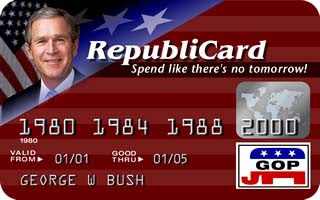 Only two months to go until the congressional midterm election are held and the GOP is nervous.

They should recognize the political climate. It's the same mood in the country for change that they rode to take control of the House and Senate in 1994. It took the GOP only ten years to surpass the level of hubris and excess of power that cost the Democrats their 40 year control of the House.

It's a lot of things. The Iraq War. The hyperpartisan Congressional gridlock. One congressional ethics scandal after another resulting in convictions for several GOP legislators. The naked hypocrisy. Using 9-11 as an excuse to gut our constitutional freedoms. The cover ups.

They are hopefully cruising to an election day disaster.
Posted by Monica Roberts at 1:48 AM

I agree that we republicans got our asses kicked in the election.