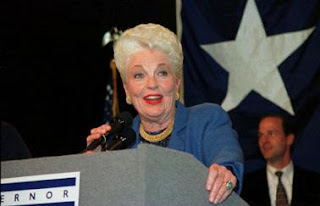 Like many Texans I was saddened to hear that my former governor lost her battle with cancer.

When election time rolls around I usually take politicians promises to inclde my community if we help them get elected to office with a grain of salt.

Well, this silver haired lady with big hair wasn't kidding about that. After she won a bruising Democratic primary versus Mark White and beat multimillionaire Republican nominee Clayton Williams that November to become Texas governor in 1990, she made good on that promise.

Her 'New Texas' administration reflected the diversity of the state by appointing more minorites and women to state agencies than all her previous gubenatorial predecessors combined. The legendary Texas Rangers inducted their first women and African-American officers into their ranks. The Universities of Texas and Texas A&M saw the first African-Americans added to their Boards of Regents during her tenure. She also erased a $6 billion debt piled up by the previous GOP governor Bill Clements and turned it into a $2.5 billion dollar surplus. She got several major companies to relocate their corporate headquarters to Texas cities and did it with her trademark humor and sense of style.

Usually that kind of success gets you a second term. Unfortunately her 1994 reelection bid was against a revenge-minded George W. Bush, the son of the man that Ann had lampooned at the 1988 Democratic Convention with her famous 'silver foot in his mouth' remark. With Karl Rove running the campaign it was negative and nasty and she lost despite having an approval rating in the 70's.

Goodbye, Ann. We'll definitely miss you. Texas hasn't had that kind of leadership since you left office. We were also better people for having you there at a difficult time in our state's history.
Posted by Monica Roberts at 4:34 PM