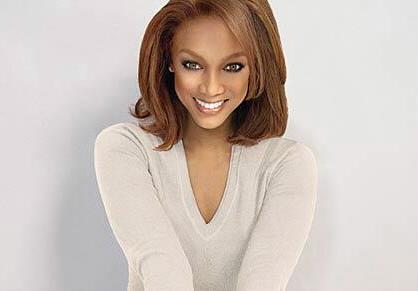 Tyra Lynn Banks exploded into prominence in the modeling world about the same time I was beginning to transition. Not only was this sista tall at 5'11", this Inglewood, CA girl is intelligent, down to earth and drop dead gorgeous to boot.

Unless you're Naomi Campbell, what's not to like about Tyra?

I admire her for representing us in the fashion area. She was the first African-American woman to be featured on the covers of GQ magazine, the Victoria's Secret catalog, and Sports Illustrated swimsuit issue. After picking up a copy of her book Tyra's Beauty Inside and Out, I realized just how special she really is and in a sense how close her life was to mine.
(no she's not a t-girl, but she did play one once on an episode of UPN's 'All of Us')

Here was a skinny kid who blossomed into a stunningly sexy woman. She's made the People Magazine's 50 Most Beautiful People list twice. She decided to become a model and was turned down by four agencies before she signed with Elite at age 17 a few weeks before she was to begin her freshman year at Loyola Marymount College.

I liked the fact that she wasn't the stereotypical model. She has curves. She's proclaimed her love of fast food, ribs and chicken wings. She's quick to point out that most of what you see in her pictures is the result of makeup tricks and the revelation on her talk show that drag queens taught her how to do her makeup.

She's done movies and had a recurring role on Fresh Prince of Bel Air. She produces America's Next Top Model and since retiring from the modeling business does her own talk show. She gives back to our community, is a determined driven lady and a wonderful role model.

Even for a Phenomenal Transwoman like myself. ;)
Posted by Monica Roberts at 8:49 AM