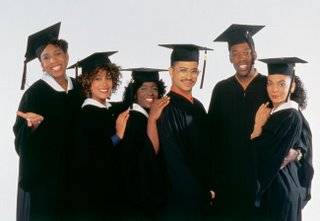 A few nights ago I was watching my DVD set of the first season of A Different World. I have been a huge fan of the show ever since it aired on September 24, 1987 and I'm anxiously awaiting the releases of the DVD sets for Seasons 2, 3, 4, 5 and 6. With the passage of time and after watching the show in syndication I have come to appreciate just how groundbreaking and special A Different World actually was.

While I was overjoyed to see representations of my generation on TV, it was glaringly obvious during Season One that the unique flavor a HBCU (Historically Black College and University) has wasn't being replicated onscreen. After that first season Bill Cosby brought in Howard University alum (and Houston homegirl) Debbie Allen as producer to shake up the show and make it more relevant to our culture.

To accomplish that task, she drew upon her experiences at Howard and instituted a yearly trip to Atlanta's Morehouse and Spelman colleges for the show's writers. During those trips they got the opportunity to talk to professors, administrators and students. During those conversations several story ideas came out of them.

In addition to fostering an increase in HBCU enrollments A Different World was an incubator for a generation of African-American writers and directors such as Gina Prince-Bythewood and Yvette Lee Bowser. It also launched the careers of Jada Pinkett Smith, Allen Payne, Sinbad, Gary Dourdan, Kim Wayans, Jenifer Lewis, Eriq LaSalle and Halle Berry and provided quality work for others. Blair Underwood, Phylicia Rashad, Thomas Mikal Ford, Khandi Alexander, Keenen Ivory Wayans, Damon Wayans, Kristoff St. John, Tisha Campbell, Rev. Jesse Jackson, Obba Babatunde and the late Tupac Shakur are some of the long list of people who made guest appearances on the show.

And who could forget the legendary Patti LaBelle endlessly bragging about her 'Chipmunk' and spoon feeding Dwayne her infamous prune cobbler in her role as Adele Wayne? Diahann Carroll playing Whitley's socialite mother Marion Gilbert?
Even Debbie Allen had a recurring role as therapist Dr. Langhorne who advised her clients to 'relax, relate and release'.

It was definitely 'Must See TV'. Nestled in a timeslot between NBC powerhouses Cosby and Cheers, A Different World was ranked Number 2 in its first season and was a Top 5 show for five of those six years In its final season it was ranked number 18. It tackled topics such as AIDS, date rape, race relations, pledging, the LA riots, apartheid and the South African divestiture issue that was raging on college campuses at the time.

It garnered numerous NAACP Image Award nominations, earned Jasmine Guy a 1992 Image Award and set a standard for excellence that future shows featuring African-American casts would do well to imitate.
Posted by Monica Roberts at 12:24 PM