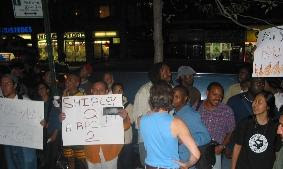 
Out of all the TransGriot columns that I’ve written
over the last two years, the one that plucks the most
nerves and has generated the most criticism (and still
does) is the May 2005 one I wrote blasting Shirley Q.
Liquor.

Exhibit A: A comment on my TransGriot blog from
Marshall (who when I clicked on his profile was too
cowardly to leave contact info in it):

You really need to get a life! If you don't like it,
don't listen to it! Ever watched In Living Color? A
show produced by black folk who did it all the time
themselves. The reason racism is still around is
because people like you and the protestors in NY wont
let it! You are full of it!

Gee Marshall (if that's your real name) did I strike a
nerve?

Sounds like you're another one of Shirley Q's fans who
get their panties in a bunch every time ANYONE calls
him out for his 21st Century minstrel show which is
demeaning and racist to African-American women.

Racism is STILL around because your ancestors
encouraged and practiced it for 400 years.

And by the way, I still have the first four seasons of
In Living Color on VHS. Shirley Q ain't even in the
same league with the Wayans family, much less Jim
Carrey.

I’m bringing Shirley Q's racist act up again because
of what recently transpired on the Eastern Kentucky
University campus.

Someone in the EKU Pride Alliance decided that it
would be a wonderful idea to bring Shirley Q. Liquor
to Richmond for an April 29 on campus performance.
I’ve already documented in the May 2005 column what
African-American GLBT peeps think about Chuck Knipp’s
brand of comedy. To us it’s about as funny as a heart
attack.

After a firestorm of protests the event was canceled.
It didn’t help that Shirley’s visit was going to occur
just as the firestorm over Jason Johnson’s expulsion
from the homophobic University of the Cumberlands was
happening. It was a public relations disaster in the
making.

We already have major problem with homophobic Black
preachers. Once they had gotten wind of this
performance it would have poured gasoline on a fire
that GLBT African-Americans are already struggling to
try to put out in terms of gay-bashing from our
pulpits.

By the way Shirley Q. defenders, please spare me the
latest defense spin about her performance is just
honoring the Black women who raised her. I just ate.

I don’t know ANY African-American women who wear
blackface, an Afro, wear multihued eye shadow in the
colors of the African-American flag (red, black and
green) brag about being a ‘welfare mother with 19
chirren’ or name their children after venereal
diseases.

It ain’t performance art, it’s a minstrel show for the
new millennium. Trotting out RuPaul or any other
African-American to defend her ain’t gonna change
that.

And if y’all are trying to defend Chuck on the ‘he’s
not racist’ tip, then check out the ’12 Days of
Kwanzaa’ ditty that got played on several Deep South
radio stations. It’s a favorite tune of white
supremacists everywhere.

The point I’m trying to make once again is that
blackface images still carry a lot of pain for
African-Americans, even in the early 21st Century.
Spike Lee tried to satirically use them in his 2002
movie 'Banboozled’ to lampoon the way Hollywood
disrespects the images of Black people and he was
savagely criticized for it. The loudest protests came
from fellow African-Americans.

So if Spike Lee can’t get away with using minstrel
show images, what makes a white gay male named Chuck
Knipp think that he can?
Posted by Monica Roberts at 8:02 PM