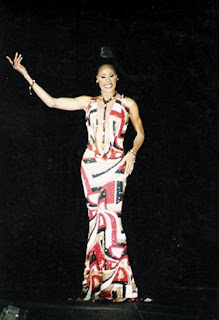 A Commentary about TG Beauty Pageants

Last night I was given the honor of acting as a judge for the inaugural Miss Imperial Diva 2006 Pageant here in Louisville. I had a great time watching it and seeing the talented Indianapolis, IN sista that eventually ran away with it, Vanessa Ross. I also liked watching special guests Amelia Black and Terri Vanessa Coleman perform and enjoyed meeting them

I've always loved watching pageants. I learned from my one night performance stint on stage (a favor to a Latina illusionist friend of mine who was dying of AIDS) that performing is no joke. It's also hard work. I have a deep apprreciation of what it takes to not only compete and win in pageants but the effort involved in becoming an elite level female illusionist.

After the show ended Joshua, Akilah and I had a general conversation about pageants in general. During our discussion we covered some things about pageants that echo real life.

It takes a lot of hard work to reach your goals.

If you want to be Miss Continental or hold a similar prestigious title, be prepared to put in a lot of work, spend a lot of money and fight your way through the stiff competition you'll have to face in order to achieve your goal.

You can be the best at what you do and still not win.

That's definitely true in the pageant world. In any event that has subjective scoring, (the Olympic gymnastics and figure skating competitions are notoriously legendary for it) you can have a flawlessly realistic look, wow the crowd with your presentation, have a killer talent, and STILL lose because you either blew an interview, had something out of place that the judges picked up on, were flat out screwed by judging or a point tabulation error.

While this is a visual society and beauty does give you a leg up in it, you can still get beat by peeps that may not have your killer beauty but work smarter and harder.

Be a classy winner and a gracious loser.

The hard part. I've seen too many peeps storm off the stage in anger after the judges decision has been rendered and it didn't go the way that the person wanted it to. Conversely I've seen some less than gracious winners and that's a turnoff too.

Some of the other reasons that I like pageants are simple. As a writer I love drama. Pageants are chock full of them. They are entertaining. It's also the competitive nature of them that gives them the feel of a sporting event.

Will the veteran title holder win tonight or will a fresh face newcomer emerge to take the crown? Vivica St. James won last month's Miss Fly Sista International prelim. Will she continue her winning ways tonight at Miss Sophisticated Diva or will her bitter rival Erica Iman snatch the crown away?

Well, you get the drift. Let the games begin. And may the best diva win.
Posted by Monica Roberts at 8:44 PM