Was hoping we could get through the month of August without losing a single trans person, but unfortunately that is not going to be the case.

We go to Chicago for our latest trans murder.

24 year old Dejanay Stanton was found in an alley at approximately 12:30 PM CDT at E.40th and S.Martin Luther King Streets on Chicago's South Side.

Stanton was discovered suffering from a gunshot wound to the head after people in the area reported hearing gunshots.  She was transported to Stroger Hospital, where she was subsequently pronounced dead. 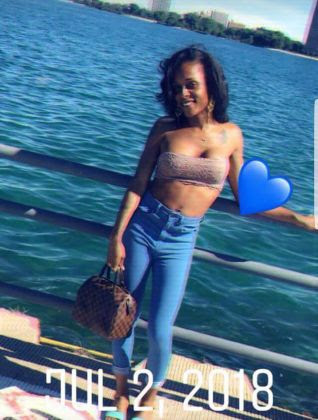 Dejanay's Black trans life mattered.   When is that point going to be unequvocally acknowledged by the Black cis community, its legacy orgs and its political leaders?

A balloon release will be held later today at the 40th and King Street alley where she was killed starting at 7:30 PM.

Chicago Police Department Area Central detectives are investigating this case, and would appreciate any information you can give them that will help bring the perpetration of this crime to justice.

Rest in power and peace Dejanay.   I'm upset that you really didn't get a chance to live your life, and I'm tired of the anti-trans animus that probably played a role in cutting yours way too short.

You trans family and all who loved you will not rest until the person who killed you has been brought to justice.
Posted by Monica Roberts at 12:00 AM

I'm forever encouraged by the bravery of Trans people. Dejanay's death is yet another shockingg reminder of just how much awakening or World has yet to do. Thanks Monica for your dedication and courage.

It's still breaking news. Our LGBT paper was all over it last night.
http://www.windycitymediagroup.com/m/APPredirect.php?AID=63918