"The young, black athletes are not disrespecting America or the military by taking a knee during the anthem. They are respecting the best thing about America. It’s a dog whistle to the racists among us to say otherwise.
They, and all of us, should protest how black Americans are treated in this country. And if you don’t think white privilege is a fact, you don’t understand America."
-Dale Hansen, September 2017

As someone who lives on the southern end of I-45 and unapologetically roots for every Houston sports team, I've always had my hate on for the Dallas Cowchips.  One NFL game I'll definitely be watching in this 2018 season is on October 7 when my beloved Texans play the Cowchips in a nationally televised game at NRG Stadium

It's not about as Cowchip fans like to crow Houston envy for their Super Bowl titles they won in the last century, but their faith based arrogance in running with the 'America's Team' moniker bestowed upon them by NFL Films.

And Jerry Jones has given me more ammo to despise them with. 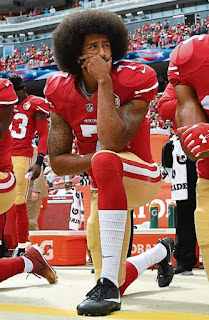 Despite the fact the NFL Players Association and the NFL are currently in talks to come to a happy medium on the anthem protests, Jones decided to kiss Trump's anus and declare along with his son Stephen Jones that Cowboys players would not be allowed to sit in the locker room during the anthem.    He also declared that any Cowboys player who protests during the anthem will be fined or cut from his team.

But Jerry loves America so much that when the anthem was played before a Cowchip practice last Saturday, he left his cap on.   When told about his mistake, he left it on anyway.

Dale Hansen made an eloquent statement last year in one of his Hansen Unplugged segments concerning why the NFL anthem protests are happening.