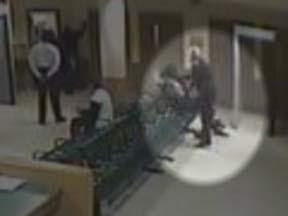 Transwomen are all too aware of police officers who abuse their authority to harrass, assault, denigrate and rape us.

The Stonewall Rebellion we jumped off almost 40 years ago this month and the 1966 Compton's Cafeteria riot in San Francisco had the same root cause: Transwomen being tired of taking crap from the police.

This crap happens far too often to transwomen of color. Former San Antonio officer Dave Gutierrez is serving time in Club Fed because he pulled over then 21 year old transwoman Starlight Bernal during a 2005 traffic stop, then assaulting and raping her.

In this latest depressing incident that happened February 12, after being arrested on prostitution charges, Duanna Johnson was beaten down and maced in the police station because she refused to repond to the derogatory terms 'faggot' and 'he/she' directed at her by the officer.

It's also galling that the nurse in the video showed far more concern for the scratch on his hand the officer received than the transgender person lying handcuffed on the floor he'd just beat down.

So HRC and Barney, you still subscribe to the asinine assertion that we transgender people need to 'wait our turn' to have our civil rights respected and protected?

This is a sample of the BS we've been dealing with ever since you sent the unspoken message last fall by yanking us out of ENDA that it's open season on transgender people.

The following statement was released this morning about the incident by the Memphis Police Department:

The Memphis Police Department does not condone any misconduct of a police officer that will compromise official law enforcement duties or the rights or safety of our citizens.

As it relates to the February incident that occurred at the jail facility, the police department has been conducting a thorough internal investigation. The details surrounding the complainant, witnesses and law enforcement officials’ statements are part of an ongoing investigation and can not be released at this time.

As a standard departmental policy, a full, impartial hearing will be held with the accused officer.

Memphis Police can confirm the work status of the two primary officers involved in this complaint. Officer J. Swain was a probationary officer and has been separated from the Memphis Police Department. Officer B. McRae has been placed on non-enforcement status pending an administrative hearing.

Memphis Police can also confirm the Federal Bureau of Investigation had been notified and requested to look into the complaint further.

The video, recorded February 12th, shows Duanna Johnson in the booking area at the Shelby County Criminal Justice Center after an arrest for prostitution. The tape clearly shows a Memphis police officer walk over to Johnson - a transsexual - and hit her in the face several times.

"Actually he was trying to get me to come over to where he was, and I responded by telling him that wasn't my name - that my mother didn't name me a 'faggot' or a 'he-she,' so he got upset and approached me. And that's when it started," Johnson said.

Johnson said the officer was attempting to call her over to be fingerprinted. She said she chose not respond to the derogatory name the officer called her.

"He said, 'I'm telling you, I'm giving you one more chance to get up.' So I'm looking at him, and he started putting his gloves on, and seen him take out a pair of handcuffs," Johnson said.

The officer hit Johnson several times with the handcuffs wrapped around his knuckles. In the video, you can see the flash of the metal. The tape shows another officer holding Johnson's shoulders as she tries to protect herself.

After taking several blows, Johnson stands up and swings back.

"I was afraid. I had had enough. Like I said, I thought the other officers that were witnessing this would at least try to stop him," Johnson said. "I mean, he hit me so hard. Like the third time he hit me, it split my skull and I had blood coming out. So I jumped up," Johnson said.

But then she sat back down, and the officer her in the face again. Then he maced her. On the tape, other people in the room are seen turning away and fanning their hands because of the smell.

"We wanted some acknowledgement - my client did - so she would know that the Memphis Police Department didn't condone this," said Murray Wells, Johnson's attorney. "We were optimistic that they would be as outraged about this as we are, and we haven't gotten any indication that they're interested in it at all.

"These are the people we depend on to protect us, and I think the majority of officers in Memphis are good officers, and when you see what you see on that video, it's a scary sight to see that that could happen to any one of us," added attorney Arthur Horne.

On the tape, Duanna is eventually handcuffed and left on the floor. A nurse comes in, and goes directly to the officer.

"I couldn't breathe, and they just made me lay there," Johnson said. "Nobody checked to see if I was okay. My eyes were burning. My skin was burning. I was scared to death. Even the nurse came in and she just ignored me, and I begged her to help me."

A copy of the tape was reviewed by both the FBI and the District Attorney's office, the latter of which dropped all charges against Johnson. An FBI investigation into possible civil rights violations is still underway.

Meanwhile, the Memphis Police Department confirmed to Action News 5 that the officer holding Johnson was on probation, and has been fired. The officer who threw the punches is currently on non-enforcement status pending an administrative hearing.

Since the video of the jailhouse beat down first aired on Action News 5, we have learned more about the other people who were in the in-take area at the jail during the incident, particularly the nurse who was called to help.

The nurse asked Duanna Johnson if she was okay, and noticed Johnson had been sprayed with mace.

A spokesman for the Sheriff's Department said the nurse determined Johnson was not in an emergency situation, and then left the room to make arrangements for the Memphis Police Department to transport Johnson to The Med for treatment.

Later, the nurse returned to provide the officer medical care for a scratch on the back of his head.

Johnson was in the custody of the Memphis Police Department during her time in the in-take area.

The Sheriff's Department also stressed that none of their deputies or employees were involved in this incident in any way, but did give statements about what they witnessed.
Posted by Monica Roberts at 9:35 PM