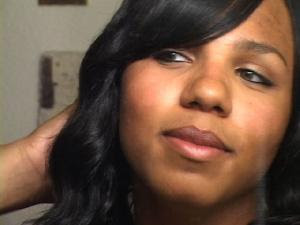 TransGriot Note: Remember Rochelle Evans, who last year fought the Fort Worth Independent School District for the right to be herself? Well, that was the easy part. This Dallas Voice story updates us on what's transpired in her life since.

Fort Worth Transgender Teen Trying To Put Life Back Together

It’s been just more than a year since local transgender teen Rochelle Evans made headlines by fighting her school district for the right to be called “she” and to be herself.

Now Evans says this year was even harder than the last.

It all started when Evans’ mom and dad got divorced after her father couldn’t handle the transition from Rodney to Rochelle.

“That was really hard,” Evans said. “But it quickly got worse.”

Evans’s mom, Lenora, lost her job and the family had to move into a one-bedroom apartment because that’s all they could afford. Evans went to live with her mom’s aunt, but there was a catch: She had to come as a male not a female.

“It just felt like I had been teased. As if you know, as if the world had teased me about what I could be,” she said. “I could be this beautiful woman. Stand up on my own. Be who I wanted to be. I could fight my school district with my mom’s support. And to have that ripped away from you hurt a lot.”

Evans and her aunt and uncle struggled over her identity. The conflict got so great that Evans moved two more times and was in and out of school so much that she racked up four months of absences.

When she tried to re-enroll in a Fort Worth Independent School District she couldn’t because she had missed too much school.

But Evans recovered. She’s living with her best friend’s family and is in an academy now and doing well.

“It’s been going great. No bullying from kids. I get along with all the teachers, all the staff. So as far as now, I’m just worried about getting my education,” Evans said.

In fact, education is so important to her that she wakes up every day while it’s still dark outside to ride the bus to school. Having just turned 16, Evans could get a license and drive, but she chooses not to because she wants to have her name legally changed to Rochelle before getting any form of identification.

"I’ve talked to a lot of older transgender men and women, and they all say until you get your name changed and your F for female put on your driver’s license, life is going to be hard,” Evans said. “And with my mom going through her financial hardships, I just haven’t been able to pursue that yet.”

Like any other teen, Evans is obsessed with text messaging her friends and trying to find a job for some extra spending money. But unlike others, employers are turning her down for being transgender.

She’s had several prospective bosses tell her so in a roundabout way and one at a restaurant chain that just bluntly said it.

Evans considered legal action but says she wants to put any more lawsuits on hold, at least until summer. That’s because her primary goal right now is doing well enough in school to get a scholarship to Texas Christian University where she wants to major in psychology.

Another hardship this year has been learning how to date as a transgender teenage girl. A situation can get sticky when Evans has to tell guys she’s interested in that she is biologically male.

“Normally they are, ‘Click.’ You know, [they] hang up in [my] face and [I] never hear from them again,” Evans said. “And you know, I can’t really blame them for it. But it still hurts.”

Plus, she always wonders in the back of her head why those who don’t hang up stay on the line.

For now, Evans is just taking everything day by day.

“Rochelle, she is just having to do a whole lot, just growing up a whole lot by herself,” Lenora said as tears ran down her cheeks. “I’m just proud of her because as always she just succeeds by herself.”
Posted by Monica Roberts at 5:03 AM

Wow, that's really tough. I wish her the best. She doesn't deserve so much trouble in her life. :(

No, and neither did her mom for standing up for her child.

And the companies that refuse to hire her need to be called out as well.

This is another example of why transgder inclusion in ENDA need to happen now, not ten, twenty or fifty years from now as HRC and Barney would like.

shoot, that is one brave gal. she rocks..

I read Rochelle's story earlier today and I applaud her for her courage. She's chosen to live her life on her terms. I pray that the future will be bright for her.

Yeah, so do I. The transkids will be all right.

It's us adults who need to keep fighting so the world will be a much better place for them to follow their dreams and make us all proud.

Hi,
I'm a journalist and I would love to interview Rochelle for a feature.
If anyone knows how I can get in touch with her I would really appreciate it.
She sounds like a very brave and determined young lady.
Thanks,
Hannah

I can be contacted at hannah.lorch@gmail.com

I SAW HER TODAY SHE WORKS AT FIESTA MART, SHE WAS SACKING MY GROCERIES. I KNEW RIGHT OFF THE BACK SHE WAS THE PERSON I HAD SEEN ALL OVER THE NEWS, BUT I DIDNT SAY ANYTHING TO HER I JUST TOLD HER THANK YOU.