HBCU's, When AreY'all Gonna Stamp Out Homophobia On Campus?

Morehouse College in Atlanta has the gravitas and justified pride in being the only all-male HBCU (historically Black college and university). It has produced distinguished alumni such as Dr. Martin Luther King, Jr., filmmaker Spike Lee and NAACP head Julian Bond. It also has a thriving gay subculture, as was alluded to in Spike's movie School Daze.

But it also has another reputation it didn't want: It's been listed since the mid 90's in the Princeton Review's Top 20 Homophobic Schools.

I was heartened to see that Morehouse at the urging of influential alums and students is taking steps to grapple with this issue. Senior student Michael Brewer and Morehouse Safe Space recently organized activities during the week of April 21-28 that started with a film created by three students at neighboring women's HBCU Spelman College called 'No Heteros'.

The film documents the experiences of GLBT students on both campuses. The 'No More No Homos Week'activities were designed to trigger a discussion on sexual orientation discrimination and homophobia not only on campus but in the African-American community at large. 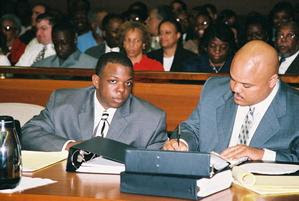 It definitely needed to do so in the wake of an ugly November 3, 2002 incident. Sophomore student Aaron Price received a 10 year sentence for beating a fellow student with a baseball bat because he thought the man was making a sexual advance at him. The victim of the attack didn't have on his glasses and stared to verify if Price was his roommate.

But Morehouse isn't alone in having a problem with homophobia on campus. Keith Boykin recounts in his blog a 2006 speaking engagement at Dayton, Ohio's Central State University that turned into an ugly mess.

One of the ongoing missions for Black colleges is to not only uplift the race by molding quality young men and women, but to serve as our community's sword and shield to dispel and disprove negative shade that segregationists and our detractors hurled at us. Since back in the day being gay had a negative context, any rumors of it on HBCU campuses were loudly debunked as the gay students on those campuses were put in a confining 'don't ask, don't tell' straitjacket in which violation of this unwritten rule would merit swift and sometimes violent disapproval.

But with more African-American GLBT students being openly proud of who they are, those who wish to pursue their educations on HBCU campuses still find that the unwritten 'don't ask, don't tell' rule is in full effect on many of these campuses. If they wish to matriculate at a GLBT-friendly college, most of the time their options narrowed to attending a predominately white one or going back into the closet to attend an HBCU.

It's also depressing to note that in the Campus Climate indexes put out by Campus Pride not one HBCU as of yet in the ones I've reviewed have taken the time to fill out the survey so that they can be ranked.

But thanks to a determined group of young Black GLBT people, many of them are paving the way to broaden the choices for these students. Like Michael Brewer and Morehouse Safe Space, they are getting HBCU's to begin dialogues about the issues and starting on campus GLBT support organizations. They are also making the point that being Black and GLBT are not mutually exclusive or separate identities.

But they also need to get the conservative administrations of many of these HBCU campuses to end their silence and speak up about these issues as well. Too many times, silence from the administration is interpreted as non-support by the GLBT students and an open invitation to the bigots to harass them.

HBCU's have a special mission and a long history of producing quality individuals who have pride in our communities and themselves. Three members of my own family and others in my extended family graduated from various HBCU's. The famous United Negro College Fund tag line 'A mind is a terrible thing to waste' also includes GLBT African-American people as well. Some of them are also alumni of HBCU's, and it's past time for HBCU's to make room at the table for our portion of the African-American family.

And one prerequisite for having GLBT people on campus is providing a safe environment where they feel comfortable enough to where they can focus on getting their educations.
Posted by Monica Roberts at 9:02 AM

On a different note in regards to Morehouse. This year was the first time the Valedictorian was a white man. He was not so accepted at first, but his class embrased him when he graduated. His goals in life reflect his time at Morehouse. He learned well there.

Wow. Thanks for pointing this out! I had no idea that Morehouse was listed as the top 20 schools deemed as homophobic, but I'm not too surprised.

Several years ago, a Morehouse student was convicted of murder for a baseball beating of a student.

NBW,
With the desire to not have the 'Morehouse Man' legend sullied by associations with gay culture, I'm surprised we haven';t heard about more conflict on campus between the gay and non-gay students there.

this is great news!