On Issues That Really Matter, There’s More That Unites Blacks and Latinos Than Divides Us 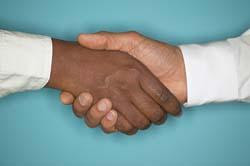 On Tuesday, Feb. 5, senators Barack Obama and Hillary Clinton battled it out, each seeking to become the frontrunner in the race for the Democratic nomination for the presidency. After the polls closed, neither candidate could truly claim a clear victory; each posted important wins. One thing was clear, however: Blacks and Latinos are not supporting the same candidate. Eight out of every 10 black voters cast a ballot for Obama, while the majority of Latino voters were pro-Clinton.

While there are differences between the two communities, there are also many shared concerns. Why, then, is there such a divide between the two groups on just which candidate should represent the Democratic Party in the national elections? One has to wonder if perhaps the black-Latino divide -- perpetrated by the media and a government that wishes to see disadvantaged groups fighting over crumbs -- is so great that even a charismatic personality and message of change can’t bridge the gap.

From the streets to the workplace, black-Latino tensions have been simmering for years, with each group fighting to gain economic and political power. Fighting between black and Latino gangs have divided neighboring communities in Los Angeles and in parts of New Orleans, where there is a recent influx of Latino immigrants. African-Americans across the country fear they are overlooked for labor jobs in favor of a Latino worker who may work for lower pay. And middle class African-American homeowners are upset with the increase of Latino homeowners in their communities. Many Latinos say there is no tension between the two groups, only envy; some think African-Americans are jealous of the gains Latinos have been able to make.

It is beyond time for the two groups to unite.

Polls have shown that blacks and Latinos share the same views and concerns when it comes to education, healthcare and the justice system. Each group struggles with supporting families and raising children in a country where the playing field has still not been leveled. Why then, do we continue to separate ourselves? Because that is what the powers that be want us to do.

In 2005, black and brown communities in Los Angeles were able to join together to elect Mayor Antonio Villaraigosa. Chicago’s black and Latino communities did the same in 1983 to elect Harold Washington, the city’s first black mayor. By working as a team, both communities benefited and were instrumental in bringing change to their city’s political system.

The Democratic primaries are far from over. It is not too late for black and brown to come together -- on the issues and on a candidate. Unity will send a strong and powerful message and set the stage for a new relationship between our two communities.

Judge Greg Mathis is national vice president of Rainbow PUSH and a national board member of the Southern Christian Leadership Conference.
Posted by Monica Roberts at 1:40 PM

What a fantastic Blog Monica , i am so happy to have discover you and this post in particular today,through the Trans Group Blog. YAY - I have you blog rolled now and would like to do a hat tip to your blog and this post.

yours in the struggle - proudprogressive.

Hey if you have never heard of the Missouri Blogging Sister Shark-Fu at her blog Angryblackbitch.blogspot.com (you probably have) but she is a great read. Another fantastic blogger.who never fails to entertain her readers with her wit and political views.

its all about networking !

an astute political friend of mine and i were discussing this phenom. I agree much of it is media driven and exploitive..same old formula of the elite , different day. She did however bring up the specific demographic of latino women..and that much of their support could be in reaction to the culture of machismo. In other words it is about gender for them, they want a female,and well ...i am way over that, but have realized that policie wise i could never cast a vote for clinton EVER. i just personally cannot. For a hundred reasons. But the gals that seemed to whipped into a frenzy over clinton are these old timey feminists (nothing wrong with em) but i would rather see history made with Obama. For a hundred reasons.

sooo , hopefully in the time between now and the convention, and the General Obama will further clarifiy UNITE, and win over more hearts and votes. So far tonight , things are going very well. Its get really ugly before its all over. So i am tryin to work double time for Unity and to educate the women i know..(i already lost friends over this, friends who are so stuck on hillary's gender, they cannot see her policies..sheesh)

Thanks for the heads up...I'll check her out.