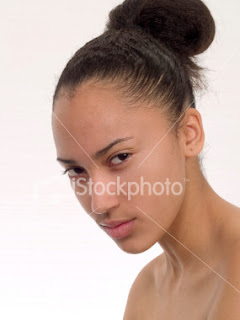 TransGriot Note: This is one I posted on Bilerico this morning that I need to share with you loyal TransGriot readers as well.

I'm not a happy camper this morning. A little after midnight EST I received a long distance phone call from a dear friend, who proceeded to shock me by revealing how despondent she was over some accumulated negativity in her life.

Then after getting approximately two hours of sleep and praying for a successful resolution to her problems, I check my e-mail this morning and get confirmation that Gabrielle Pickett was killed in June 2003.

This is on top of the reports I'm getting about the New York HRC dinner protest that Joe Solmonese is alleged to have admitted during his speech that they planned to cut transgender people out of ENDA all along.

So this morning I'm in a foul mood, and I have to get over it.

But that's gonna be tough. This accumulation of events over the last few hours has restoked my dormant anger at being cut out of ENDA. I have been increasingly hearing more and more distressing reports of transgender people who have lost hope thanks to Barney's and Joe's ENDA BS. Some are taking their lives or contemplating it as a result of their despondency over this situation.

We have had an explosion of jurisdictions since September 2007 either cutting us out of proposed policy changes such as the Jefferson County Public School Board's gay-only expansion of JCPS anti-discrimination policy here in Da Ville, or attempting to cut us out of legislation like the opposition tried to do in Scottsdale, AZ, Montgomery County MD, and Fort Lauderdale. They attempted to use the negative precedent that Barney Frank set as an excuse to deny transgender people our constitutional rights.

Fortunately for us those attempts failed and those protections passed in all three locales (unanimously in the case of Montgomery County, MD). The Fairness Campaign wasn't able to reverse what happened in Jefferson County, KY despite having an inclusive law on the books for almost a decade, and the policy squeaked by on a 4-3 vote without us. Two JCPS board members reluctantly voted for it, and were not happy that transgender people weren't included.

I'm even more upset that the Forces of Intolerance in the Montgomery County, MD battle are using the Barney Frank crafted 'showers argument' as cover for their bigotry. These so called 'christians' have lied, cheated and obsfucated their way into collecting enough signatures in their attempt to force an election to overturn the new law and deny their fellow transgender citizens civil rights coverage.

Barney Frank has the nerve to get indignant when he gets rightfully called out by Matt Foreman and others for being the Grinch Who Stole Civil Rights. Joe Solmonese is getting huffy along with his alleged civil rights organization because they are justifiably taking heat for their decade long morally bankrupt position opposing transgender inclusion in ENDA.

And while these two (and other anti-transgender gay exclusionists) gloat over their no prize winning hollow ENDA victory and try to justify their actions with the bogus 'incremental progress' lie, my people die.

They are dying either by their own hand or at the hands of the haters out there who took your actions as a signal that it's open season on transgender people. I shudder to think about how many names we'll be memorializing during this year's Transgender Day Of Remembrance events this November. One thing I can say with certainty is that a disproportionate number of those names we read later this year will be African-American and Latina.

The way I and some transgender people see it, every transgender person since September 2007 who violently dies or loses a shot at gainful employment because of your reprehensible actions, their blood is on your hands.

I hope that Joe, Barney and everyone who donates money to HRC can live with that.
Posted by Monica Roberts at 3:17 PM

I hear you Monica. loud and clear. This situation is very serious. Too many people angry hurting betrayed. And two Kids killed in the last month alone. These (insert explicative here) better freaking come to their senses. As for the HRC not one red cent. Dispicable in every way. No more forgiveness, no more chances. I mean really how many times. How many times ...Now if the rest of the lgb comm. would wake up and see that this so called premiere lobbying group is an elitest bunch of sell outs..maybe we could rebuild a better Big old group - Washington insiders ..who needs em. I mean with "friends" like this , ..you know the saying.

I'm curious to find out how you know for sure that Gabrielle is dead. I've done some investigating and the people that I find that tell me she's dead, point back to the same source. A source that I don't think is very reliable. I do think she's dead, but I don't think anyone knows positively .

Thank you for this post, as difficult as it was to read.

I'm wondering if you might be able to share a source or two re: Solmonese admitting that HRC never intended to include trans people in ENDA? Thanks!