The Only 'F' I Ever Want

Back when I was in school the 'F' was something to avoid and be ashamed of. It was a source of negativity and a graphic representation of failure. I wanted to avoid seeing it on any report card I handed to my parents, any test that I took or any paper I wrote.

Since transition however, the 'F' has taken on a new connotation for me and other transwomen. It represents validation and official acceptance of our lives.

The gender marker code on our official documents is another war that we must fight just to validate our personhood. Back in 2000 I was determined to vote in that upcoming presidential election under my new name and have my voter registration reflect it. You don't know how happy I felt when I left the Harris County courthouse an hour later with a brand new voter registration card with my new name and an 'F' in the gender code box. I felt eight feet tall when I handed my new voter registration card to the precinct judge during early voting and affixed my signature to the line on the computer printout of registered voters that had Monica on it.

Gender codes reflecting our reality are vitally important to us. In a society in which we have to present identification every day for mundane things, it's a source of embarrassment, shame and anger when we are required to produce an ID that has a femme name on it but a big fat 'M' in the gender code box. A gender code that you know deep down is based on your genitalia's configuration at birth. 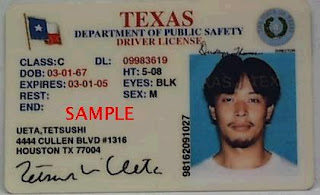 My old Texas driver's license had some gender memories attached to it. Back in 1978, when HISD was still offering driver's ed I took it in summer school, which was being hosted by Jones. For the road driving portion of it we were put in groups of four. I ended up in a car with three other women. One was my Thomas Jr. High homeroom classmate Rita Roy who now attended Lamar. The second sistah was a girl named Yvonne Sibley who attended Sterling and the third was a sista named Berlye Magee that went to Yates.

It was bad enough I was in a car with three gorgeous sistahs. I had a crush on Rita back in fifth grade and she'd become even more beautiful since we left Thomas. It was another aggravating reminder that I was on the wrong side of the gender fence.

The Real ID Act, passed in the wake of 9-11 is an aggravation for all transgender people. One of the other things I lobbied for back in May in addition to passage of hate crimes was the repeal of Title II of the Real ID Act. It makes it harder for us to change the gender marker on our identity documents. Those markers should reflect who we are in 2007, not what our genitalia was thirty to forty plus years ago. 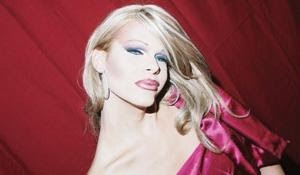 The wrong gender marker also opens us up to discrimination. You don't have to be a MIT grad to figure out what's going on if a person standing in front of you in a female body hands you an ID with an 'M' in the gender marker portion of it.

If you think I'm exaggerating about this, check out this August 2 Dallas Voice story about transwoman Jodi Pleasant, who was denied entry into a Bossier City, LA casino because the gender marker didn't match her presentation.

We transpeeps are also having problems with the Social Security Administration. Your Social Security number is permanent and you aren't allowed to change it but you can change the name. What the SSA has been doing since 2002 is sending employer's letters if a SSN doesn't match with the name in the SSA database. That has the effect of outing transpeople to their employers. If those employers are transphobic, then that letter has the effect of potentially costing them their jobs.

Transpeople shouldn't have to jump through hoops to change gender codes on any identity documents. Neither should we be required to produce letters proving that we've had SRS. Not everyone will be able to have SRS for fiscal or medical reasons. For transmen their surgeries aren't even close to being satisfactory for them and they often forgo them. Simple proof that the person has been living in their new gender for an extended period of time should be enough to do that.

We need to strike a compromise that balances the needs of society to accurately ID a person and balance it with the desire of transpeople to have that ID accurately reflect their new reality.
Posted by Monica Roberts at 4:17 PM

Thank you. These ideas should be stated over and over again until understanding people listen and fully understand. The world can be a dangerous and oppressive place. Hopefully things will change in a positive way for the transgender.
I would certainly enjoy getting that F.