FRC Is Deploying The Kneegrow Sellouts Against You What's Your Response TBLGQ Community? 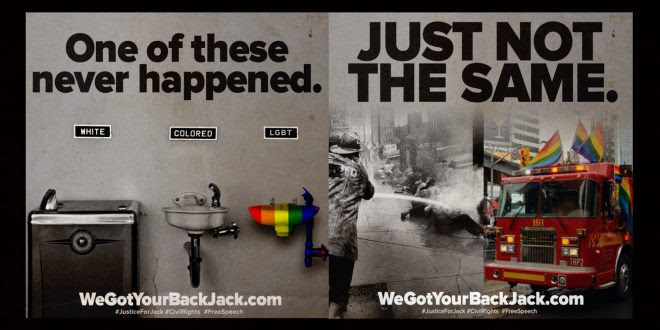 Myself and other Black TBLGQ people have been warning people in the white TBLGQ ranks for years that if you didn't start actually hiring Black TBLGQ people for your organizations, that one day the hatemongers would notice and exploit your willful racial blind spot to use against you.

That day has now come to pass.  In a Washington DC press conference held on the steps of the Supreme Court, the conservakneegrows were cooning it up for conservamassa in advance of the Masterpiece Cake 'religious liberty' SCOTUS case that will be argued in front of the SCOTUS on December 5.

Of course the conservakneegrows tried to once again push the tired line that the African American Civil Rights Movement and the TBLGQ rights movement aren't the same.

Well, duh conservafools, that's already a given because both have different goals.

But there sure is a lot of overlap.  And while the movements are different, the oppression and the oppressors we face are the same, and they have been emboldened to act now that Trump is in office.

Where they are also similar is that we are fighting in Tony Perkins and his dishonorable friends the same white right wing Bible thumping fundamentalists who opposed Dr King then and currently oppose our 21st Century human rights fight as TBLGQ people. 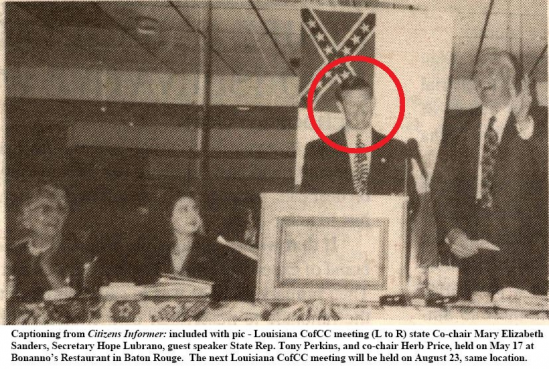 And to back up my point about who it is we're fighting, the person circled in red speaking at this  Louisiana Council of Conservative Citizens (the remixed White Citizens Councils) meeting that Dr King and others fought in the Civil Rights Movement days is none other than the FRC's Tony Perkins.

So naw, conservakneegrows, you are not 'standing up for you faith, you are traitorously colluding with our longtime human rights enemies and cosigning white supremacy if you have Jack's back.

To quote 1 Timothy 5:8   Anyone who does not provide for their relatives, and especially for their own household, has denied the faith and is worse than an unbeliever.

And note to you useful fools: it has always been the coal of the conservative movement to drive a wedge between the Black and TBLGQ communities.  There are more similarities than differences in the two movements, and that's a point that civil rights warrior John Lewis made sometime ago but bears repeating.

"I fought too long and too hard to end discrimination based on race and color, to not stand up against discrimination against our gay and lesbian brothers and sisters. Dr. Martin Luther King, Jr. once said, “injustice anywhere is a threat to justice everywhere.” As your representative in Congress, I work daily to combat injustice and fight for equality.


Another civil rights warrior who also had something to say about the civil rights and TBLGQ rights movements is Coretta Scott King.

"I believe very strongly that all forms of bigotry and discrimination are equally wrong and should be opposed by right-thinking Americans everywhere. Freedom from discrimination based on sexual orientation is surely a fundamental human right in any great democracy, as much as freedom from racial, religious, gender, or ethnic discrimination.

"My husband, Martin Luther King Jr., once said, 'We are all tied together in a single garment of destiny... an inescapable network of mutuality,... I can never be what I ought to be until you are allowed to be what you ought to be.' Therefore, I appeal to everyone who believes in Martin Luther King Jr.'s dream to make room at the table of brotherhood and sisterhood for lesbian and gay people."


Tony Perkins and his conservakneegrow auxiliaries want to quote the Rev Dr. Martin Luther King, Jr out of context and hoodwink and bamboozle you into forgetting this point, but duh, Black TBLGQ people exist.   And we are more than just backdrops for your fundraising photos for your predominately white and LG orgs to fundraise off of.

Bayard Rustin, James Baldwin, Lorraine Hansberry wee major though leaders and influencers for the Black civil rights movement.   Rustin and Baldwin were thought leaders for the TBLGQ one as well

Bayard Rustin, James Baldwin, and Lorraine Hansberry were major thought leaders and influencers in the Black civil rights movement  who are also part of the TBLGQ community

Sadly, it seems as though our white TBLGQ siblings want to forget at times we exist, especially when it comes to getting paid for this community's human rights work or who is seen as spokespersons for it.

But the reality is glaringly apparent that for our orgs to be at maximum effectiveness in fighting the right wing tyranny aimed at us by the Christohaters, they must be as diverse as this community in order to beat back these cynical attempts to play racial wedge politics that pit the Black and TBLGQ communities against each other.

So what are you gonna do, now that the haters are deploying kneegrow sellouts against you?