The Repeal of Houston’s Anti-Crossdressing Ordinance 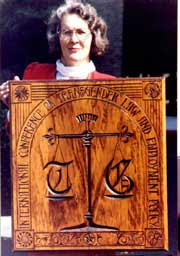 The 26th anniversary of the repeal of this odious ordinance just passed, but there's an interesting story behind it.

“You are under arrest for dressing as the opposite sex.”

Mayes was arrested under the crossdressing ordinance, Section 28-42.4 of the city’s Code of Ordinances, which prohibited “a person from appearing in public dressed with the intent to disguise his or her sex as that of the opposite sex.” This ordinance had its roots in combination with other ordinances that went all the way back to the year 1904, according to Phyllis Frye, the prominent transgender lawyer and activist who took on the outrageous ordinance and won.

As we celebrate the repeal of another repressive law used to vilify the gay community, we thought it important to remember and celebrate the repeal of the crossdressing ordinance 20 years ago this August 12. “The reasoning of the ordinance was totally specious to begin with,” said Jackie Thorne, president of the Gulf Coast Transgender Community, “Very similar to 21.06, the sodomy statute, it was used more to harass than anything else.”

Mayes was the most well-known person prosecuted under the law, being arrested multiple times, sometimes on the steps of the police station as she was being released from a previous arrest. But she was by no means the only one. Largely under the infamous antigay reign of Houston Police Chief Herman Short, the ordinance was used to hound and harass many in the gay and transgender communities. In bars, men in drag could be arrested unless they were on stage or on their way to or from the stage, as remembered by Ray Hill. Likewise, the police would go into women’s bars and arrest anyone wearing fly-front jeans.

Then Phyllis Frye appeared on the scene.

“In September, 1976, I began my full-time correction and was subject to enforcement of the ordinance,” recounts Phyllis. “Shortly afterwards, being terrified of arrest via the ordinance, I wrote to every single member of the then-Houston City Council, then-Mayor Fred Hofheinz presiding.”

Her sole positive response was from Councilman Johnny Goyen, who told Phyllis that he had always been puzzled by Anne Mayes, but was especially upset over the way that she’d been mistreated under the ordinance. It was eventually Goyen who would sign the repeal of the ordinance, four years later.

Part of Phyllis’ struggle was just to get policy makers to take her seriously. She lobbied on many fronts simultaneously, writing letters, making phone calls, hitting the downtown government offices several times a week, lobbying the municipal judges. She became active in the feminist movement, joining the League of Women Voters, where she believes that Lynne Johnson, then president of the league, used her influence to convince the power structure that Phyllis was indeed serious and deserved their attention. Phyllis gave lectures for many university classes. She even met with the deputy chief of vice, Fred Bankston, at the invitation of then-police chief B.G. “Pappy” Bond—pretty amazing, considering that as they discussed the crossdressing ordinance, Phyllis was, of course, most assuredly breaking it. Also amazingly, she was not arrested.

As did any transgender person during that time, Phyllis spent these four years of activism never knowing if she was about to be arrested, although of course her taking a public role made her most especially vulnerable.

As transgender writer Vanessa Edwards Foster describes the experience (although she herself has never been arrested): “You’re not a fugitive, have no outstanding warrants, obeyed the traffic laws, and you’ve not stolen a thing. Yet you now find yourself being handcuffed in front of a curious throng who stare and snicker.”

In 1979, Phyllis found an advocate in Councilman Ernest McGowen. In the spring of 1980, Councilman John Goodner made a sarcastic slighting remark about Phyllis’ crusade, further stirring up the waters. Several council members approached Goodner privately to take him to task: Councilman Lance Lalor suggested that Goodner move to repeal the ordinance, which he did, with Lalor seconding it.

As Phyllis remembers that period: “Lance told me to leave City Hall and not to come back until the repeal went through. He told me to trust his skills now that the repeal ordinance was in motion....

“On August 12, 1980, the ordinance to repeal was again before Council. Then-Mayor Jim McConn was out of town (as was Jim Westmoreland). Johnny Goyen was Mayor Pro-tem. City Secretary Anna Russell gave the repeal ordinance to Johnny while council members Homer Ford and Larry McKaskle were on the phone. He asked for a vote. Homer and Larry were not even aware it was up for a vote. Councilmember Christin Hartung was the sole and only no vote. Homer and Larry went to Johnny Goyen about five minutes later. In short, Johnny played dumb, saying something like, ‘Oh my goodness, did I let that slip by without giving you guys a chance to vote NO or tag it?’”

The ordinance was repealed that day and has remained off the books ever since.
Posted by Monica Roberts at 11:49 PM