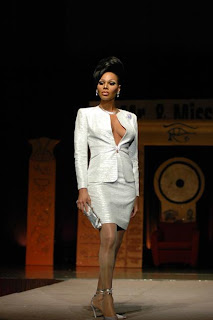 We ARE Role Models-To The Entire World
Copyright 2006, THE LETTER

While I was in Philly collecting the Trinity I earned I spent some quality time reconnecting with my girls Jordana and Dionne. Thanks to her musical talents she's probably the most well known African-American transwoman on the planet. She’s also lived in London and Thailand and has friends and contacts all over the world.

During our conversations she and Dionne reminded me of something that I’ve observed over the years but didn't connect the dots until they pointed it out.

African-Americans are considered some of the wealthiest people of African descent on the planet because we live in the United States. Many of our brothers and sisters in the Caribbean, Africa and throughout the African Diaspora seek to emulate us. They look to us for guidance and leadership on many issues. In addition, our African cousins admire the Jamaicans and us.

What that means is that whatever we do as African-Americans has reverberations throughout the Diaspora. People in the Motherland take their cues from them and us.

How much, you ask? In addition to culture and style issues, the African colonial independence movement used the American Civil Rights movement as a model. Nelson Mandela borrowed Dr. King’s tactics when South Africans began waging their own successful battle against apartheid. He mentioned in a speech during the 90’s that support from African-Americans was critical to that success and that he and other South Africans listened to Motown, various R&B and rap artists for inspiration at various times during their decades long struggle for freedom.

Our influence even extends to attitudes about various social issues. Jordana pointed out that homophobic rap artists in the States influence much of the
homophobic content of Jamaican reggae. The sellout ministers anti-homophobic stances and US politicians using anti-gay attacks to divert attention from pressing domestic problems or to defuse political dissent has filtered back to the Motherland via Jamaica.

Here are some disturbing examples of it.

After hearing reports that a gay wedding had taken place in a Kampala suburb between a hairdresser and his boyfriend, Ugandan President Yoweri Museveni spoke out against same sex relationships by saying that the full law should be used against such "abominable acts".

Nigeria was preparing in April to pass a punitive law that would not only prohibit same sex marriages, but would also punish people who witness, celebrate with or support couples involved in same sex relationships with mandatory five year jail sentences.

Our African cousins even have their own code word for their homophobia. Instead of screaming ‘special rights’ they will argue that homosexuality is "un-African." In other words they blame the European colonizers. They declare that homosexuality is foreign to the continent, against its teachings and traditions and even against what the Bible teaches.

In fact some Africans will go further in buttressing this bogus argument by stating that there is no word for homosexuals or homosexuality in their local African languages.

But it’s common knowledge on the continent that an ancient Ugandan king "paid special attention to boys in his court". A former national President and a prominent church leader on the African continent were recently convicted of sodomy and sexual assault.

The most enthusiastic practitioners of anti-GLBT policies are Zimbabwe’s President Robert Mugabe and Namibia’s former president Sam Nujoma. Mugabe has been very outspoken since 1995 against gays and has been quoted as saying “homosexuals are lower than pigs and dogs". He has backed up his hate speech by relentlessly persecuting GLBT people in his country.

President Nujoma told University of Namibia students on March 19, 2001 that "The Republic of Namibia does not allow homosexuality or lesbianism here. Police are ordered to arrest you, deport you and imprison you."

Members of Nujoma's cabinet have made similar statements that homosexuals should be "eliminated" from Namibian society. The intolerant climate they created led to the death of a Namibian transwoman last year.

So when we say on TSTB that our images and perceptions in the African-American transgender community need to be more positive, we aren’t kidding.

The ability of people in the Diaspora and on the African continent to live their lives proudly and openly may depend on our ability in the United States to do just that.
Posted by Monica Roberts at 6:27 PM

Hey Monica! Lots of interesting stuff you have to say.