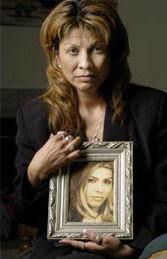 
I am not sure how I expected to feel at this point. When my daughter Gwen, a transgender teenager, was brutally murdered on Oct. 4, 2002, I was sure that I would never feel whole again. Looking back, I didn't yet know exactly what "transgender" meant or how to fully embrace my child's identity. But I knew one thing: I wanted justice for my child.

I thought that maybe I'd feel better on the day when the four suspects in her murder were brought to justice. More than three years and three months since Gwen's murder that day is finally here. On Friday, these men are being sentenced to prison terms for their actions, two of them convicted of second-degree murder and two taking plea bargains for voluntary manslaughter. I guess I hoped that once we got to the sentencing date, the pain would end and I could get back to my life. But it hasn't and I can't.

No amount of justice can return the part of me that these men took when they killed Gwen. The closure that people keep talking about hasn't come. It would be so much easier to write that it had. After all, that is what most people want to read: The system worked; my family is whole; the story is over. It would be comforting and allow us to get on with our lives. Of the many things I'm feeling, closure isn't one of them.

I'm angry. Angry that Gwen's brothers and her nieces and nephews won't get to grow up knowing her the way her aunts, uncles, older sister and I did. Angry that instead of celebrating her birthday, we get together each year to commemorate her death. Angry that, in both trials, the defendants tried to blame Gwen for her own murder. Angry that other young lesbian, gay, bisexual or transgender kids continue to face the discrimination she did in our public schools and our workforce.

I'm also grateful. Grateful that my family and our friends rose to the challenge and sat through two gruesome and explicit criminal trials to make sure that everyone knew that Gwen was loved for who she was. I'm grateful for the support we've all received from perfect strangers who have told us in-person and through e-mail that we are in their thoughts and prayers. I'm grateful for the remorse that two of the defendants and some of their family members have expressed to me and my family.

And I'm sad. Sad that I'll never get to see Gwen grow into the beautiful woman she would have become. Sad that four men chose to end my daughter's life, and throw away their own simply because they thought they were acting like "real men." And sad that other transgender women have been killed since Gwen's murder and that we don't have a realistic end in sight to that violence.

Within this mix of emotions, though, the one that I hold onto most dearly is hope. Since that tragic night, my own family has grown by two beautiful grandchildren. More and more parents are supporting their transgender children. California has become the country's most protective state for transgender people. And just this month, a new law has been proposed in Sacramento, the Gwen Araujo Justice for Victims Act, authored by Assemblywoman Sally Lieber, D-Mountain View, and sponsored by Equality California, an LGBT civil-rights lobbying group, to protect people from being blamed for their own murder.

Maybe the reason I don't have closure around Gwen's death is that there is still work to do. If I've learned anything since Gwen's murder, it is that hope alone is not enough. Each of us who hopes to live in a state where our families are protected needs to work toward making California that place. For instance, boys and girls in schools throughout the Bay Area need to hear, firsthand, how important it is to be themselves and to respect each other's differences.

None of us can change the way the world was on Oct. 4, 2002. But each of us now has an important role to play in creating a state where we can celebrate more birthdays and commemorate fewer murders.

Sylvia Guerrero is the mother of Gwen Araujo and an activist for LGBT civil rights. She speaks at schools around the Bay Area through the Gwen Araujo Transgender Education Fund administered by the Horizons Foundation.
Posted by Monica Roberts at 2:04 PM