When I started TransGriot back in 2006, one of the problems I had was trying to find photos to illustrate the trans-specific  concepts I wanted to talk about or even photos of our trans events. 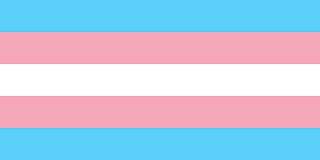 As the years went by, that got better in terms of the trans event coverage, but there are still times when editors mistakenly use the rainbow flag instead of the trans pride flag to illustrate a specifically trans themed article, or they resort to the insulting right wing practice of using unflattering drag queen photos to do so.

Because there has been an increase at stock photo sites of inquiries for transgender themed photos, was happy to discover that Broadly has launched the Gender Spectrum Collection.

It is a photo library of over 180 images taken by Zackary Drucker of trans and non binary models that we can use to better illustrate our written work.

This started because of an issue that cropped up in an article that Diana Tourjee wrote in August 2015 for Broadly a few months before she later joined them as a writer concerning tucking.   Because there was a still surprising dearth of stock trans themed photos at the time,  the editors went with a bottom shot of a man.

That's a problem as a trans feminine writer,  When Tourjee later joined the staff she asked them to change the photo on that article.When I had that dilemma with TransGriot articles, I would use cis feminine photos to illustrate those concepts, and cis masculine ones for trans masculine discussions

The Gender Spectrum Collection is a much needed and necessary step forward toward more inclusive media coverage of trans and gender non binary people.  It is also a blessing that some of the photos are of trans masculine people because far too often they are erased from the stories and narratives talked about in our community.

The Gender Spectrum Collection is also important because representation matters.  We also have to consider that when I or any person writes an article about a trans person, it may be the first time the individual reading the article sees a trans or gender non binary person.

That's why the images used to illustrate those articles are just as important as the words written by the writer to convey those concepts talked about in the article.

First impressions matter, especially when we are now in a time in which evilgelicals, the TERF's, the Republican Party and conservative media are openly colluding to sow  as much disinformation and lies about transgender people as they can get away with.

I hope this image library continues to grow, and I know I will be using the photos that are applicable to this and any future TransGriot posts.
Posted by Monica Roberts at 12:00 PM