Trans women all over the world are stepping up to run for office in their various nations in large part because we recognize that we must be at the table helping to write the laws that govern us.

Running for office is happening even in nations with a history of being violently hostile to our existence.   Rihanna Ferrera is the latest trans Honduran to attempt to get elected to her nation's national legislative body in their upcoming November 26 elections.

Ferrera is running to represent the department of Francisco Morazan which contains the Honduran capital of Tegucigalpa as a candidate for the center-left United Social democratic and Innovation (PINU) Party.  Honduran trans women have made two previous attempts in 2012 to get elected to the Honduran Congress.

Ferrera is also the co-founder of the Asociacion Cozumel Trans, a trans advocacy organization based in Tegucigalpa

Claudia Spellman and Victoria Gomez both attempted to do so that year as LIBRE Party candidates, but subsequently had to seek asylum in the US and Spain after receiving death threats.

28 year old Kendra Stefany Jordany recently became in March the first trans Honduran to win a party primary in the nation, and is trying to get elected as a representative to the Central American Parliament  which is based in Guatemala City, Guatemala 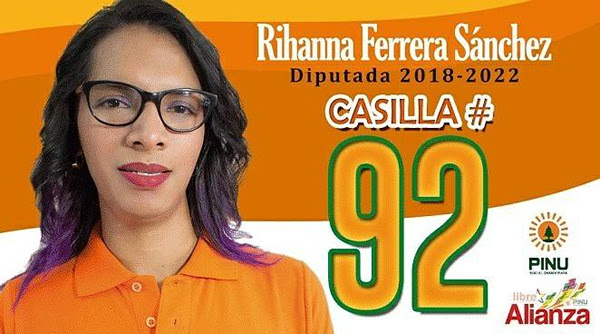 Ferrera, should she be successful, would become not only the first trans Honduran elected to the national congress, she would also become the first trans person in North America. the seventh in the world and only the third in the Western Hemisphere to be elected to her national legislature
Posted by Monica Roberts at 10:30 AM