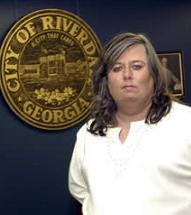 TransGriot Note: I had the pleasure of meeting Michelle at the 2004 SCC, and I was disappointed when she didn't get reelected to her Riverdale, GA city council seat. Michelle has the distinction of being the first open transgender person ever elected to public office.

Ga. transgender politician wins lawsuit that said she misled voters by running as a woman

Georgia's top court ruled in favor of a transgender politician who was slapped with a lawsuit by two political opponents who claimed she misled voters by running as a woman.

The Georgia Supreme Court's unanimous ruling on Monday found that the two political opponents who filed the lawsuit failed to produce evidence of fraud, misconduct or illegal action after claiming that Michelle Bruce bamboozled voters by identifying herself as female.

"This is a great victory for me and anyone who believes in equality," Bruce said in a statement. "It gives me hope that the Georgia Supreme Court did what was right and did not buy into hate-based politics."

Bruce, who was believed to be the state's first transgender politician, landed one of four council seats in Riverdale, Ga. in 2003. Running unopposed, she pledged to attract more jobs and residents to the struggling town 12 miles south of Atlanta.

Last year, however, three people signed up to run against her, and she failed to capture enough votes to avoid a runoff against second-place finisher Wayne Hall.

The third-place finisher, Georgia Fuller, and a candidate in another race, Stan Harris, filed a lawsuit after the primary that identified Bruce as "Michael" and sought a new election.

It's unclear whether most voters knew of Bruce's transgender status before the lawsuit was filed. She has declined to say whether she has had surgery but said she has always identified herself as transgender.

"I'm Michelle," she said when the suit was filed. "I'm the same Michelle they elected four years ago."

Hall won the runoff, and Bruce blamed the lawsuit for her defeat.

Meanwhile, the complaint made its way through Georgia's legal system. In its decision Monday, the court ruled for Bruce and concluded that "none of these alleged irregularities is specific enough to cast doubts" on the election.

Gay rights groups said the lawsuit appears to be a first in the country.

"I am not aware of any other case involving the issue of whether a transgender candidate is defrauding the citizens," said Cole Thaler, an attorney with Lambda Legal, a gay rights group.

Bruce's attorneys said they felt vindicated by the ruling.

Michael King, the attorney for the plaintiffs, said he was disappointed and surprised by the decision.

"We think there were significant irregularities and misconduct to reverse the election," he said.

Bruce, meanwhile, said she is now taking courses at an online law school and hopes to again serve the public as an elected official.

"I still have a dream to serve my community," she said. "And I'm not giving up."

Georgia Supreme Court: http://www.gasupreme.us
Posted by Monica Roberts at 5:10 AM

Glad she won too, Genny