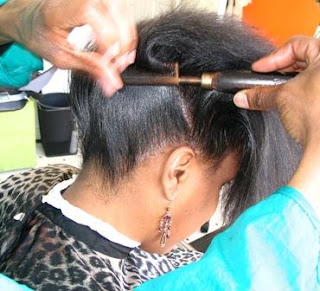 One of the things that I was apprehensive about after I started transition in 1994 was finding a beauty shop to hook up my hair. I had the task of not only finding a beautician that would be open minded enough to understand what we transwomen have to deal with, but also have a flexible enough schedule to deal with my airline work schedule. I was also concerned about whether or not I would fit in with her current clientele.

I didn't have to go very far. Ironicially it was the one my ex-girlfriend went to. Sadat Busari's shop at the time was right next door in the strip shopping center to my old apartment complex on Bissonnet. I started going to A Cut Above and was a faithful customer of hers until the time I moved to Da Ville in September 2001.

One of the things about African-American male culture is that the barbershop was the center of the universe. It's where guys talked politics, listened as other guys discussed women, bragged about their sporting prowess, sports knowledge and relationships. The seniors gathered at a table in the back and played dominos while waiting for their turn in the barber chair.

I grew up with a female barber. One thing about my hometown is that I had a lot of strong women in my life and Miss Charlene was one of them. She'd been cutting my hair at her Sunnyside area shop on Scott Street since I was 6 years old. She chewed my behind if my grandfather Leo reported to her that my grades slipped. She was the one that taught me how to play dominos and I used to partner with to play against and beat the old heads. I had been accurately pontificating on a wide variety of subjects since I was 10 and my thoughts were respected by the young and old denizens of that shop. 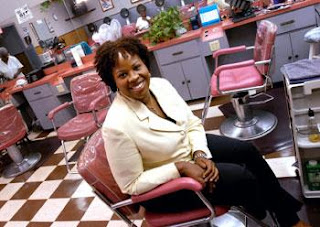 Some of my apprehension was generated because I wondered what the atmosphere was like in a beauty shop and whether I'd fit in. My mom, aunt and sisters always went to my grandmother Lou Ella's house to get their hair hooked up on Saturdays and I was the person who frequently ended up driving them over there once I got my driver's license.

I discovered that it's not too dissimilar to what I'd experienced in my old barbershop. While we didn't play dominos in A Cut Above, I was right in my element when we discussed politics, books we'd read and talked about relationships. It was also a lot of fun for me because I was in discovery mode (and still am) when it came to life as an African-American woman and I reveled in being there.

I discovered that some sistahs could be just as raunchy as the guys were sometimes when it came to discussing sex. One of the customers used to give us details about how she worked her boyfriend over the night before. I was amused to find out later her boyfriend worked for CAL like I did. Since some of the customers knew my T-woman status, I ended up breaking down their relationship problems and giving them advice based on the knowledge gained from living on the other side of the gender fence and knowing how the male thought processes work. 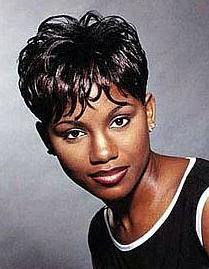 If it was just me and Sadat in the shop, sometimes we trade details on our lives. I learned about her childhood growing up in the Biafra region of Nigeria, dealing with being a wife, mother and business owner and being part of the Nigerian community in Houston. She heard me talk about my family, some of my airport exploits, my desire to see less bickering between African-Americans and our Nigerian cousins and my latest, sometimes humorous discoveries I made about navigating a gender change.

And yeah, Sadat hooked up my hair in the process to the point where I was always getting compliments on it.
Posted by Monica Roberts at 10:30 AM