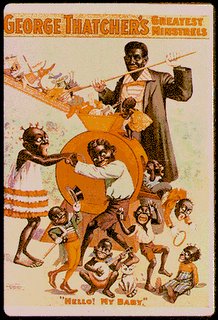 Out of all the columns that I’ve written over the last two years, the one that plucks the most nerves and generated the most criticism (and still does) is the May 2005 one I wrote blasting Shirley Q. Liquor’s 21st century minstrel show.

Exhibit A: A comment on my blog from Marshall (who when I clicked on his profile was too cowardly to leave contact info in it):

You really need to get a life! If you don't like it, don't listen to it! Ever watched In Living Color? A show produced by black folk who did it all the time themselves. The reason racism is still around is because people like you and the protestors in NY wont let it! You are full of it!

Gee Marshall (if that's your real name) did I strike a nerve?

Sounds like you're another one of Shirley Q's fans who get their panties in a bunch every time ANYONE calls him out for his 21st Century minstrel show which is demeaning and racist to African-American women.

Racism is STILL around because your ancestors encouraged and practiced it for 400 years.

And by the way, I still have the first four seasons of In Living Color on VHS. Shirley Q ain't even in the same league with the Wayans family, much less Jim Carrey.

Shirley’s fan base rose to defend the indefensible. They first tried to call it a comedy act. (Yeah, right) Then the defense line became, "It's satire and you don’t get it." Yeah, the '12 Days of Kwanzaa' was sooo funny white supremacists everywhere have turned it into their favorite Christmas song. 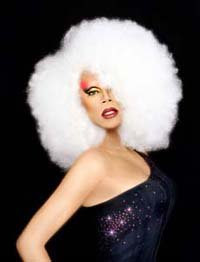 What you Shirley Q. fans don’t get is that minstrel shows and those images still carry a lot of pain for African-Americans and trotting RuPaul out to defend her doesn’t change that one bit.

But the latest defense line is the one I want to talk about in detail. The new spin is that Shirley Q. Liquor is honoring black women by doing her schticKKK. If that were the case, then why schedule a 2002 New York performance on Martin Luther King Day if Mr. Knipp is soooo sensitive to African-American culture and wants to honor the women who raised him?

There will be a short break while I roll my eyes and double over in laughter.

Okay, I’m back. We now return you to your regularly scheduled column

Honoring the black women who raised him? You got to be kidding. I don’t know any African-American women or transwomen who wear blackface, multi-rainbowed eye shadow, an Afro and brag about being a ‘welfare mother with 19 chirren’. 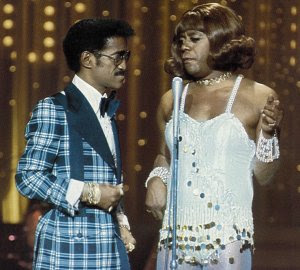 Wanna talk about drag portrayals that honor Black women? Let’s start with the late Flip Wilson’s Geraldine Jones. Even the ones that I have a mild dislike for such as Miguel A. Nunez’s Juwanna Mann,Martin Lawrence’s Big Momma and Shenehneh from his ‘Martin’ show have their base in our culture and aren’t done in a demeaning way.

You may also want to hop down to your local video store and pick up copies of any Tyler Perry play or the movies ‘Diary of a Mad Black Woman’ and ‘Madea’s Family Reunion’. Tyler Perry’s Mabel ‘Madea’ Simmons IS rooted in our culture and is also played in a way that honors Black women. She represents the family matriarch that takes no prisoners, zealously defends her family members when the world does them wrong and dispenses wisdom and sound advice to all that need it. She also ain’t afraid to administer the rod to unruly disrespectful children either. 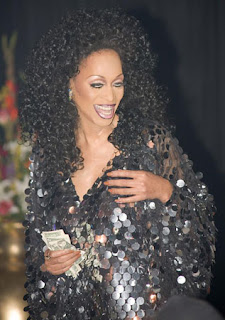 But the gold standard for drag performances that honor Black women takes place at any pageant or various GLBT clubs. Legendary divas such as Tommie Ross, Stasha Sanchez and Domanique Shappelle exude beauty, class and dignity and there are other up and coming illusionists who strive to meet those standards that these ladies have set.

Those are cornerstones to living life as an African-American woman. It shows a nekulturny lack of understanding and disrespect for African-American culture and the struggles that we’ve had to survive in this country when you are trying to equate Shirley Q. Liquor with that.
Posted by Monica Roberts at 12:31 PM

I am just getting an opportunity to check out your comments on SQL. I am not a fan of Chucky, but I will say that we may have brought part of this accepted bahavior on ourselves. Though racism has existed for quite sometime and many have fought and died to see it end, unfortunately many like the Wayans brothers, have made it ok. If we continue to make fun of ourselves in such demeaning ways, what can we expect from others. We must clean up our own b4 we can reprimand others too harshly.

I keep hearing this comparison to the Wayans Brothers. It is NOT the same. The Wayans are comedians. Chucky is about as funny as Michael Richards.

The Wayans only did the 'White Chicks for a movie. Chucky is trying to make a cottage industry off this nouveau minstrel show.

I have to ask the question why do peeps even think it is acceptable to lampoon African-Americans?

If we can't get away with doing streotypical images of Asians, Latinos, gays or other groups, then the same respect needs to be given to us.